Israeli election: Netanyahu on course for another four-year term 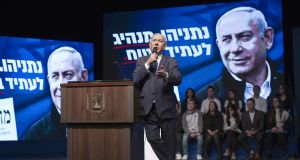 Binyamin Netanyahu, Israel’s longest-serving prime minister, is on course for another four-year term, as TV exit polls after Monday’s election left him only one seat short of an overall Knesset majority.

Mr Netanyahu’s party, Likud, emerged as the single largest by a significant margin, winning a projected 36-37 seats, compared with 33 for the centrist Blue and White, led by former top general Benny Gantz.

Mr Netanyahu’s right-wing/religious bloc was projected to win 60 seats, compared with 52-54 for the centre-left parties.

Holding the balance of power is Yisrael Beiteinu, led by former defence minister Avigdor Lieberman, with six to eight seats. Although staunchly right-wing, Mr Lieberman made it clear last night that he would not sit in a Netanyahu government.

Mr Netanyahu’s victory is all the more remarkable because in two weeks’ time he will appear before the Jerusalem district court to face charges of bribery, fraud and breach of trust in three separate corruption cases and faces a possible jail term if convicted.

He denies any wrongdoing, saying he is the victim of a left-wing “witch hunt”, aimed at toppling him from power.

Blue and White argued that Netanyahu could not function as prime minister while fighting to clear his name in court, but under Israeli law he is not required to step down unless convicted, and after an appeal. Such a process could take years.

His opponents fear that Mr Netanyahu, who initially attempted to win parliamentary immunity, may now try to push through legislation delaying the trial as long as he remains prime minister.

Mr Netanyahu is almost certain to form the next government. The Likud hope the final count will result in a 61-seat majority. If not, they are likely to try to tempt a member of the opposition to desert in order to ensure such a majority. After already serving as prime minister for 14 years, 11 of them consecutively, this could be Netanyahu’s greatest victory ever, even though his next government will only have a wafer-thin majority at best.

There is little appetite for a fourth election, and a scenario under which Mr Gantz could cobble together a coalition looks like mission impossible.

Monday’s election represented another nail in the coffin of the Israeli left. The two left-wing parties, Labour and Meretz, ran on a joint list but even together were only projected to win six seats.

Turnout in Monday’s vote was 65.5 per cent – the highest for an Israeli election since 1999 – particularly impressive considering this was the third time Israelis had gone to the polls in a year, following two inconclusive elections last year.

Yohanan Plesner, president of the Israel Democracy Institute, noted that although Netanyahu has won a significant political mandate, Israel is heading towards constitutional uncertainty.

“The country will find itself in the unprecedented situation in which the man in charge of institutions of law and order will begin his fight to clear his name in court,” he said.