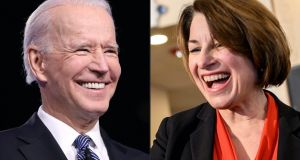 US senator Amy Klobuchar has ended her presidential campaign– becoming the third Democratic candidate to drop out of the race in the last 48 hours.

The Minnesota politician is expected to endorse former vice-president Joe Biden at a campaign event in Dallas on Monday night, ahead of Democratic primaries in multiple states on Super Tuesday.

Ms Klobuchar had a better-than expected performance in the party’s New Hampshire primary last month, finishing third. But she failed to capitalise on that support in subsequent contests in Nevada and South Carolina.

Her decision to drop out of the race on the eve of Super Tuesday, when more than a dozen states cast their votes, is a major boost for Mr Biden, who is hoping to capitalise on his wide-margin victory in South Carolina on Saturday.

It comes a day after Pete Buttigieg ended his presidential campaign and caps a major reconfiguration of the Democratic race to elect a nominee to take on Donald Trump in November’s election.

The 38-year-old military veteran – the first openly gay candidate to run for the Democratic nomination – confirmed he was suspending his campaign in his home town of South Bend.

Tom Steyer, the billionaire businessman who finished in third place at 11 per cent in South Carolina having invested millions of dollars in the state in advertising, also suspended his campaign on Saturday night, stating that he could not see a path forward to the nomination.

He has not yet endorsed another candidate. The significant narrowing of the field comes after Mr Biden secured a huge boost when he surged to victory in the South Carolina primary on Saturday.

Mr Biden, who has long argued that the southern state would be his “firewall”, clocked up a better-than-expected victory in the state, clinching almost 50 per cent of the vote.

The strong performance by the former vice president has imbued his campaign with a much-needed lift as the Democratic primary season enters a decisive phase with 14 states and one US territory due to vote tomorrow.

Speaking to supporters in Columbia, Mr Biden thanked the voters of South Carolina for backing him. “Just days ago, the press and the pundits had declared this candidacy dead,” he declared. “Now thanks to all of you – the heart of the Democratic party – we’ve just won and we won big because of you, and we are very much alive.”

He also made a barely-veiled dig at frontrunner Bernie Sanders, asserting that Americans did not want a revolution but instead wanted “results.”

“If Democrats want a nominee who’s a Democrat, a lifelong Democrat, a proud Democrat, an Obama-Biden Democrat, join us,” he said to cheers. “We have the option of winning big or losing big. That’s the choice.”

Mr Biden’s commanding victory puts him close behind Mr Sanders in the Democratic race. But he faces a tough battle on Tuesday when more than a third of all delegates are up for grabs. Polling suggests that Mr Sanders is on course to win California – the largest state in the union with a coveted 415 pledged delegates – and possibly Texas, though Mr Biden has been polling better in the state and campaigned there on Monday.

Mr Biden is also polling relatively well in southern states voting on Tuesday such as Virginia and Alabama.

Michael Bloomberg, the former mayor of New York who has spent hundreds of millions of dollars in advertisements, was not on the ballot in South Carolina but is contesting Super Tuesday states – the results will offer the first indication of his level of support in the country.

Mr Bloomberg was due to air a new prime time three-minute ad addressing his ability to deal with the coronavirus on Monday, the latest in a series of polished tv and online ads devised by his campaign.

Mr Biden’s resolute victory on Saturday in South Carolina could underscore his argument that he is the best person to take on Mr Sanders.

The Vermont senator, who won the nomination contests in New Hampshire, Nevada, and the popular vote in Iowa, responded to his second-place showing in South Carolina at a rally in Virginia, one of the Super Tuesday states. Mr Sanders’s surge in the first three primary states, had sparked alarm among many on the moderate side of the Democratic party that the high number of candidates is effectively splitting the non-Sanders vote.

“There are a lot of states in this country. No one wins them all,” he said to his supporters. “I want to congratulate Joe Biden tonight.” But he urged his supporters to look ahead to Super Tuesday, where he is well-placed to win a number of states, building in part on his growing popularity among Hispanic voters.