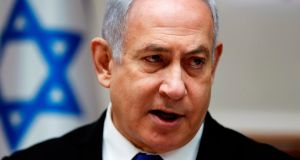 The Likud and Blue and White parties have agreed to hold Israel’s next general election on March 2nd should the Knesset parliament fail to agree by a Wednesday midnight deadline on a candidate to form a new coalition.

Such a scenario is extremely unlikely and the new election, the country’s third in a year, means Israel’s unprecedented period of political deadlock will extend for at least another four months until a new government can be sworn in.

The March vote will mark the first time in Israel’s history that an incumbent prime minister will run for the country’s highest elected office under indictment. In November, attorney general Avichai Mandelblit announced that Binyamin Netanyahu would be charged on multiple corruption charges, including bribery, fraud and breach of trust.

The centrist Blue and White emerged as the largest party following inconclusive elections in September, winning 33 seats, one more than Mr Netanyahu’s Likud, but Mr Netanyahu was supported by 55 Knesset members from right-wing and religious parties and received the mandate from President Reuven Rivlin to form a coalition.

He failed to do so in the allocated 21-day period, as did Benny Gantz after he was handed the mandate.

A unity government emerged as the fallback option, but despite the fact that all the leading politicians spoke of the need to avoid a third election at all costs, negotiations on a Likud-Blue and White coalition were complicated by Mr Netanyahu’s impending trial.

Mr Gantz had promised his voters that he would not to sit with a prime minister under indictment. However, the Likud rejected the Blue and White proposal under which Mr Gantz would serve first as prime minister, to be replaced by Mr Netanyahu if, and when, he proved his innocence in court.

Mr Netanyahu explained that it was important to him to serve for at least the first six months for the sake of continuity and for the opportunity to promote a defence pact with the US and apply Israeli sovereignty over the Jordan Valley in the occupied West Bank.

“These things can only be achieved by the prime minister, not by others. I have a unique relationship with the US president and with the public in the US,” he said.

Mr Netanyahu also rejected an offer from Mr Gantz this week to publicly pledge that he would not seek parliamentary immunity from prosecution, in order to facilitate expedited negotiations to form a unity government.

The decision by Mr Mandelblit to indict Mr Netanyahu failed to produce a dramatic shift in voting intentions, according to the polls, and it is entirely possible that the March vote will once again fail to break Israel’s political deadlock.