However watchdog notes ‘basic, fundamental and serious errors’ in FBI’s wiretap use 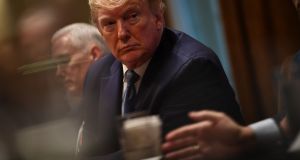 US president Donald Trump in the Cabinet Room at the White House on December 9th. Photograph: Brendan Smialowski/ AFP/Getty

A highly-anticipated report has debunked US president Donald Trump’s claim that the decision by US intelligence services to open an investigation into Russian interference in the 2016 US election was politically motivated. But it did accuse the FBI of “basic, fundamental and serious errors” over its requests to wiretap a former adviser to Mr Trump, Carter Page.

The report, which was conducted by the department of justice’s watchdog, found that the Russia investigation, which explored possible collusion between members of the Trump campaign team and Russia, was justified.

But it also outlined serious lapses in the FBI’s processes for securing court approval to wiretap Mr Page.

Responding to the report’s release, Mr Trump said it was “incredible” and “far worse than I would have ever thought possible. It’s an embarrassment to our country, it’s dishonest, it’s everything that a lot of people thought it would be, except far worse”.

Mr Trump, and US media outlets such as Fox News, have long argued that the FBI used discredited information, including research from former MI6 spy Christopher Steele which had initially been commissioned by Democrats, to lodge court requests for surveillance rights over Mr Page.

The warrant – known as a FISA warrant (Foreign Intelligence Surveillance Act) – was granted to the US intelligence services. But Michael Horowitz, the inspector general, found that one FBI lawyer had altered a relevant document related to the court request.

William Barr, the attorney general and head of the justice department, said the report by the inspector general showed there had been a “clear abuse” of the wiretap process. He also said that the report showed “that the FBI launched an intrusive investigation of a US presidential campaign on the thinnest of suspicions that, in my view, were insufficient to justify the steps taken”.

The FBI-mandated investigation into Russian electoral interference was opened during the US presidential campaign in 2016. Former FBI director Robert Mueller was appointed as special counsel in 2017 and took over responsibility for the investigation, publishing his final report in March this year after 22 months.

As the release of the lengthy document occupied minds in Washington on Monday, the latest public hearing in the ongoing impeachment investigation into Mr Trump’s dealings with Ukraine continued on Capitol Hill. Democrats are seeking to build a case that Mr Trump conducted impeachable offences when he asked Ukrainian president Volodymyr Zelenskiy to investigate former vice-president Joe Biden and his son Hunter, during a phone call on July 25th.

Daniel Goldman, the lawyer for the House intelligence committee, said that Mr Trump had demanded a quid pro quo when he asked Mr Zelenskiy to investigate Mr Biden, a political rival who is running for the Democratic nomination for president.

Using clips from previous committee hearings in recent weeks, Mr Goldman and Barry Berke, counsel for the House judiciary committee, argued that the facts in the impeachment inquiry were not in dispute, and Mr Trump should be impeached for his activities.

But counsel representing Republican members of the committee accused Democrats of seeking to remove Mr Trump “because they disagree with his policies”. Stephen Castor, the minority counsel for the judiciary committee, said that Democrats were “obsessed with impeaching president Trump by any means necessary”.

“The Democrats went searching for a set of facts on which to impeach the president – the emoluments clause, the president’s business and financial records, the Mueller report and allegations of obstruction there – before settling on Ukraine.”

Monday’s hearing began with the removal of a member of the public who interrupted the hearing as committee chairman Jerry Nadler opened the session.

With the judiciary committee expected to draw up articles of impeachment against Mr Trump as early as this week, Monday’s testimony could be the last public hearing in the inquiry.

Should the committee vote in favour of the articles, the motion to impeach Mr Trump would go to the full House of Representatives for a vote, possibly next week.

Mr Trump is only the fourth president in US history to face impeachment. Andrew Johnson and Bill Clinton were impeached but cleared by the senate. Richard Nixon resigned before an impeachment vote was held.