Restrained Trump gives Saudi Arabia the benefit of the doubt 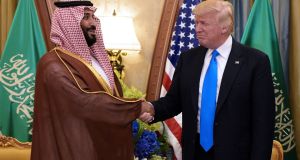 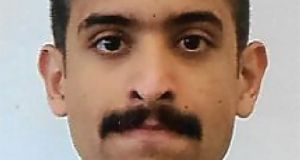 The suspect has been named as a Saudi national – Ahmed Mohammed al-Shamrani, a Royal Saudi Air Force member.

A reminder of US president Donald Trump’s unique foreign policy priorities has been served following the killing of three American soldiers at a military base in Florida on Friday.

The suspect has been named as a Saudi national – Ahmed Mohammed al-Shamrani, a Royal Saudi Air Force member.

The FBI is treating the incident as an act of terrorism and investigating whether he was part of a larger network. Officials believe that the 21-year-old may have authored an anti-American diatribe posted on Twitter shortly before the shooting.

Trump’s response to the incident, which left three young Americans dead, has been bewildering.

Shortly after the attack he tweeted that King Salman had expressed his “sincere condolences” in a phone call. In uncharacteristically restrained tones, he echoed those sentiments to the press, respectfully reading a statement from the king, who said “that this person in no way, shape or form represents the feelings of the Saudi people who love the American people”.

Trump’s apparent deference to Saudi Arabia was at odds with some members of his party, who immediately called on the country to co-operate in the investigation, and questioned the vetting system that allows hundreds of Saudi and other foreign nationals to train in America under Pentagon-sponsored programmes.

Trump’s instinct to give Saudi Arabia the benefit of the doubt typifies his transactional approach to foreign alliances, and his steadfast support for the House of Saud. A traditional ally of the United States in the Middle East, particularly over its stance on Iran, Saudi Arabia has had unwavering support from Trump at a time when its activities have alarmed the international community.

Saudi Arabia’s offensive against the Houthis in Yemen has led to one of the world’s most deadly human catastrophes. The murder of journalist Jamal Khashoggi in the Saudi consulate in Istanbul last year stunned the world. Despite the CIA’s conclusion that Saudi crown prince Mohammed bin Salman ordered the murder, the US president said that “maybe he did and maybe he didn’t”, noting that the Saudis had invested a lot of money in the US.

The unquestioning alliance between the two powers may date back to the lavish reception the kingdom showered on Trump when he chose Saudi Arabia as the location for his first foreign trip as president in 2017. Trump’s son-in-law Jared Kushner also cultivated a friendship with the crown prince.

On Saturday, Trump doubled down on his comments, suggesting that the Saudi royal family would in some way “help out” and be “involved in taking care” of the families of the three victims – aged 19, 21 and 23 – of the military base shootings. The president then spoke to the crown prince on Sunday.

One wonders how Trump would have responded if the suspect had been a foreign national of another country, such as Iran or Syria, which were included in his controversial travel ban – a policy allegedly introduced to prevent the kind of incident that unfolded on Friday in Florida.