Isis ‘far from finished’ as jihadi fighters regroup in Syria

Jihadis trying to exploit rivalries among enemies and stage a comeback, say opponents 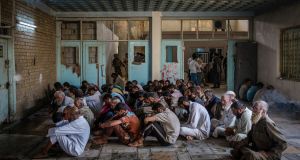 Islamic State is regrouping in Syria despite being driven from its strongholds as the jihadi force exploits rivalries between its foes in an attempt to stage a comeback, Syrian opposition and regime fighters say.

Over the past year, Islamic State, also known as Isis, has lost swaths of territory across Iraq and Syria as competing international alliances battled to defeat it – a US-led international coalition supports the Iraqi military and Kurdish-led militias in Syria, and a Russia-Iran-led alliance backs Syria’s president Bashar al-Assad and militias in Syria and Iraq.

But just months after the last big Isis strongholds were retaken in Syria, and Russia and Iran declared the jihadis had been defeated, rising tensions and new territorial ambitions among the international forces have shifted the focus away from the remaining Isis pockets. A Turkish offensive in northwest Syria against US-backed Kurdish militias that successfully fought Isis is adding to the tension.

“Isis is far from finished – and there is probably a willingness on many sides to leave its remainder alone so it can attack their enemies for them,” one Syrian opposition figure said.

An al-Qaeda splinter group, Isis was long tolerated by opposing sides in Syria’s seven-year conflict in the hope its attacks would weaken rivals. In 2014, Isis was able to sweep across nearly half of Syria and a third of neighbouring Iraq, proclaiming a “caliphate”. But by 2016 nearly all sides were making concerted efforts to advance against the jihadi force.

As the caliphate crumbled, Isis spent months funnelling money out of its stronghold to fund its disparate network of forces. It now appears to be working to connect cells and supply lines across Syria, some Syrian opposition fighters said.

“They’re not trying to control towns,” a tribal sheikh from the east of the country said. “What they’re doing is opening up routes. They need to connect their remaining pockets and sleeper cells scattered across Syria – from the southern border, all the way to Albu Kamal [in th east].”

Resurgent cells could act as nodes for Isis to move forces and organise attacks across Syria, he said.

Such a development would risk a more protracted, drawn-out struggle to regain stability in a country where the conflict forced millions to flee to neighbouring countries and sent a wave of refugees toward Europe.

According to the Syrian Observatory for Human Rights, a UK-based monitoring group, Isis control went from nearly 50 per cent of Syrian territory to three per cent late last year. In the past two months, it said, Isis control had crept back to 3.7 per cent and the jihadi group seized 82 villages in northwest Syria.

In 2017, Isis militants began slipping into the porous desert borderlands between Iraq and Syria as its de facto capital Raqqa fell to the US-backed Syrian Democratic Forces (SDF), a Kurdish-dominated militia, and Russian-backed Syrian forces retook the cities of Deir el-Zor, Mayadeen and al-Bukamal.

Yet in recent months Russia and the US have accused each other’s Syrian ground partners of allowing the Isis resurgence in the east of the country.

Colonel Ryan Dillon, the US-led coalition spokesman, denied the SDF was tolerating an Isis presence, arguing the sprawling desert terrain was harder to recapture than urban areas. Isis forces “are more spread out and they are not as easy to target as if they were in a concentrated area,” he told the FT.

Yet some US-backed opposition fighters and activists suspect their own side could be allowing small Isis pockets to survive so they can attack and weaken the regime and its main backer in the region, Iran.

At the US-held base of al-Tanf, near Syria’s border with Jordan and Iraq, one rebel fighter linked the resurgence to US-Iran tensions, which are likely to intensify after Washington announced this month that 2,000 US troops would remain in eastern Syria to deter Isis and counter Iran’s growing presence.

“The Iranians practically controlled al-Bukamal. Now Isis is taking over, all over again,” the fighter said. “I think the [US-led] coalition could use exterminating Isis as an excuse to seek control of that whole area.”

Western coalition officials say Assad’s forces, which now control more than half of Syria, are too thinly stretched to keep Isis in check, especially as they launch new offensives against the rebels. Dillon pointed to reports that Isis has been able to move forces through regime-held territory.

Opposition activists argue a new regime offensive on Idlib, held largely by anti-Assad rebels and an al-Qaeda affiliate known as Hayat Tahrir al-Sham (HTS), has allowed Isis to establish a foothold in the province, the first time it has had a presence there since 2015.

Many Isis fighters fleeing their collapsing strongholds in eastern Syria found refuge in Idlib, said Aymen Jawad al-Tamimi, an analyst for the Middle East Forum. “For the regime, [Isis] was useful in inflicting losses on HTS,” he said.

Opposition activists in Idlib say long-established Isis sleeper cells may be activated with the rebel hold weakened. “There are villages here sympathetic to Isis that are just waiting for it to come liberate them,” said one activist.

Syrian government soldiers deny the Assad regime is allowing Isis advances and say it is their own side that is facing exposure. One soldier said he was worried Isis might seek to cut the main government supply route to Aleppo, Syria’s second city: “If they [do] . . . that would gratify their terrorist needs,” he added. – Copyright The Financial Times Limited 2018