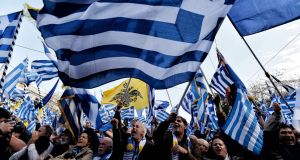 Demonstrators urge the Greek government not to compromise in the name row with neighbouring Macedonia, at Syntagma Square in Athens, on February 4th. Photograph: Valerie Gache/AFP/Getty

More than 100,000 Greeks have protested in Athens against any compromise deal with Macedonia to end a bitter 27-year-old dispute over its name.

Since the ex-Yugoslav state gained independence, Greece has refused to accept its name, which allegedly implies a claim on a neighbouring Greek region called Macedonia and on the legacy of Alexander the Great, a king of ancient Macedon.

The row forced the country to join the United Nations in 1993 as the Former Yugoslav Republic of Macedonia (FYROM), and Athens has vowed to block its efforts to join the European Union and Nato until the disagreement is resolved.

Relations between Greece and Macedonia have improved markedly in recent months, however, and both governments suggest a deal could be done this year, with “Upper” and “New Macedonia” being touted as possible compromise names.

Hardliners resent such a prospect however, with Greek nationalists insisting the word “Macedonia” must not feature in the new name, and their Macedonian counterparts furious that Athens should have any say in what they call their country.

Waving banners reading “Macedonia is Greece” and “Hands off Macedonia”, protesters massed on Sunday on Syntagma Square outside the Greek parliament for a rally organised by diaspora groups and backed by church and military veterans’ associations.

Some 2,500 buses and several ships reportedly brought people to the rally from around mainland Greece and the islands; some wore traditional Greek costume and military uniform from different eras.

“Macedonia is Greek and only Greek,” Allia Sarellis, a protester who flew in from the United States for the event, was quoted as saying.

“They are trying to steal history. We all have to fight and let the world know.”

Renowned composer Mikis Theodorakis, who wrote scores for the films Zorba the Greek and Serpico, told the crowd he backed a referendum on the dispute.

“Macedonia was, is and will forever be Greek,” declared the icon of resistance to the military junta that ran Greece from 1967-1974.

“If a government considers signing on behalf of our country . . . there is no doubt it must first ask the Greek people,” Mr Theodorakis (92) added.

Calling the Macedonian state “illegitimate”, he claimed its people “seek to join Nato and the EU with our own vote, so they can threaten us tomorrow from a position of strength”.

A spokesman for the rally, Michalis Patsikas, predicted before it began that it would be “majestic” and “send a very strong message both inside and outside Greece”.

He expected a million people to protest, but police estimated turnout at just 140,000. Last month, police said about 90,000 people attended a similar rally in the northern Greek city of Thessaloniki, but reporters said some 300,000 people were actually there.

For the first time in seven years, the prime ministers of Macedonia and Greece met for talks last month and expressed their determination to strike a deal.

As a sign of goodwill, Macedonian premier Zoran Zaev said he would remove Alexander the Great’s name from his country’s main airport and its highway to Greece – reversing decisions made by the previous, nationalist government, which also erected a huge statue of the ancient hero in the centre of the capital, Skopje.

Greek foreign minister Nikos Kotzias said on Wednesday he believed the name dispute would be “settled” by June; the next day, officials said he had received the latest of several letters threatening him and his family.

After meeting Macedonian officials on Thursday, the UN mediator on the issue, Matthew Nimetz, said he thought “we are talking about weeks and months, not longer periods . . . I believe this is the time for a decision.”