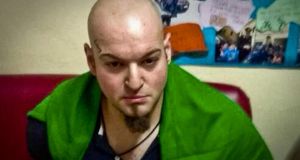 Luca Traini, who last year stood as a League candidate in a local ballot, but failed to win any votes. He has a neo-Nazi symbol tattooed above his eyebrow. Photograph: ANSA via AP

Leftist Italian politicians are pinning blame for a racist shooting binge in central Italy on the far-right League party that looks set to make major gains in a March 4th national election.

Six African migrants were shot and injured on Saturday in the city of Macerata by an Italian man named as Luca Traini, who last year stood as a League candidate in a local ballot, but failed to win any votes.

Police said Traini, who has a neo-Nazi symbol tattooed above his eyebrow, admitted to carrying out the drive-by shootings and had shown no remorse.

League leader Matteo Salvini, who has forged an electoral pact with former prime minister Silvio Berlusconi, distanced himself from the attack, but said the violence was the direct result of mass immigration into Italy in recent years.

“If anyone is to blame, it is the government which has allowed hundreds of thousands of illegal migrants to come here without any limits,” Salvini told La Stampa newspaper on Sunday.

“Salvini has created fear and chaos and should apologise before the Italian people,” said Laura Boldrini, speaker of the lower house of parliament and a leading figure in the left-wing Free and Equal party.

Seeking the moral high ground, the ruling centre-left Democratic Party (PD) called for calm. “It would be easy to stir controversy against those who fuel hatred against us every day, but it would be a mistake,” said PD leader Matteo Renzi.

Opinion polls say the PD will lose next month’s parliamentary election, with Berlusconi’s centre-right bloc set to win the most seats, lifted in part by rising support for the League though short of an absolute majority.

After taking charge of the League in 2013, Salvini shunted the party to the far right, adopting an uncompromising anti-immigration stance and allying himself with the National Front in France and the anti-Islam Freedom Party in the Netherlands.