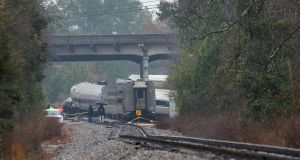 A derailed Amtrak car can be seen up the tracks near a crossing after an early morning collision with a CSX freight train on Saturdayin Cayce, South Carolina. Photograph: Logan Cyrus/AFP/Getty Images

A locked track switch is being blamed for the collision of an Amtrak passenger train with a freight train that killed two people and injured more than 100 in South Carolina on Sunday and is again raising questions about the rollout of a new system to make US railways safer.

The head of the National Transportation Safety Board said a switch on the tracks, which the freight hauler CSX Corp owns and operates, was padlocked in a position that steered the Amtrak train on to a siding near Columbia, South Carolina, where it crashed into a parked, unoccupied CSX train.

“Key to this investigation is learning why the switch was lined that way,” Robert Sumwalt, the chairman of the NTSB, told reporters. The incident was Amtrak’s fourth deadly crash since December.

Amtrak president and chief executive Richard Anderson told reporters on Sunday that CSX was responsible for the wreck of Train 91 because of the locked switch. CSX officials were not available for comment.

Mr Anderson said in an email to staff that the Amtrak train was “on the track as dispatched by CSX, the host railroad ... Our crew on 91 was cleared to proceed by CSX dispatch, but CSX had lined and padlocked the switch off the mainline to the siding, causing the collision.”

“It is important to understand the factors that contributed to this tragic accident and how all stakeholders can ensure a safe and reliable rail system going forward,” the department said in a statement Sunday.

A deadly Amtrak crash in December near Seattle that killed three occurred on a section of track that did not have PTC operating and could have prevented the derailment, the NTSB said.

In 2008, Congress mandated the implementation of PTC nationwide by the end of 2015, then extended that deadline until the end of 2018.

Officials from both companies expressed condolences to the families of the two Amtrak employees killed.

Two patients remained in critical condition and another two were in “serious” condition at Palmetto Health hospitals, a spokeswoman said Monday. Another 56 patients admitted from the crash had since been treated and released. – Reuters