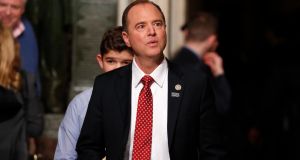 A top Democrat in Congress has accused his Republican colleagues of carrying out “a political hit job on the FBI in the service of the president” with the release last Friday of a memo assembled by House intelligence committee chair Devin Nunes.

The extraordinary charge, which underscored the rift that has opened between Donald Trump and America’s most powerful law enforcement agency, was delivered on Sunday by Adam Schiff, the ranking Democrat on the intelligence committee.

Mr Schiff told ABC’s This Week that Republican members of the committee had declined to interview FBI officials as they bulldozed forward to release a memo they hoped would discredit the investigation of Mr Trump’s Russia ties.

Trump privately hoped the memo, which ties top figures in the Russia investigation to alleged law enforcement malpractice, would give him political cover to make changes in the justice department and potentially short-circuit the Russia inquiry run by special counsel Robert Mueller, according to multiple reports.

He added: “Other sources of information are going to decide not to share with the FBI because they can’t rely on our committee not to be partisan in the handling of that information.”

Speculation continued on Sunday about whether the president would try to fire Mr Mueller or Rod Rosenstein, the deputy attorney-general overseeing the special counsel’s work.

Dick Durbin, the number two Democrat in the Senate, told CNN’s State of the Union that doing so would “precipitate a constitutional crisis”.

Former Trump chief-of-staff Reince Priebus, who left the White House last July, told NBC’s Meet the Press: “I never felt that the president was going to fire the special counsel. I never heard that.”

A White House spokesman told CNN on Friday that “no changes are going to be made at the Department of Justice”.

Paul Rosenzweig, a homeland security official in the George W Bush administration, tweeted that with the release of the Nunes memo, the Republican party had fully consummated its union with Trump.

“If you stay in the party you own this,” he wrote. Even as the president tweeted on Saturday that the memo “totally vindicates” him, however, elected officials on both sides of the aisle said the memo had done nothing to change the substantial allegations at the heart of the Russia inquiry.