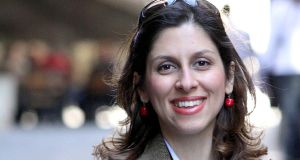 Nazanin Zaghari-Ratcliffe was sentenced to five years in prison over allegations of plotting to overthrow the Tehran government. Photograph: Family Handout/PA Wire

Nazanin Zaghari-Ratcliffe must wait another week for a decision on whether she will be permanently freed from jail in Iran.

The British-Iranian mother had hoped to be updated on Saturday on the progress of a bid for clemency but she has been told to call back next week.

Mrs Zaghari-Ratcliffe had been in Iran’s notorious Evin prison since 2016 but was released on furlough on March 17th as the Covid-19 pandemic swept through the country.

Her family were hopeful that she might be permanently released as part of an amnesty for 3,000 prisoners at the end of Ramadan, which was announced by the country’s supreme leader.

But two weeks after Eid, her husband Richard Ratcliffe told the PA news agency the authorities are “really playing with us at this stage”.

He said: “I worried beforehand that Nazanin’s furlough would just become a new phase of her being a bargaining chip, a way of using us to signal to the UK that there are two paths ahead, a way to keep us hovering permanently between hope and despair.

“This is no way to keep testing someone after four years of trauma. There is no halfway house in a hostage situation. We remain exposed – and will be until she is home.”

Mrs Zaghari-Ratcliffe was arrested at Tehran’s Imam Khomeini airport while travelling with her young daughter, Gabriella, to meet her parents in April 2016.

She was sentenced to five years in prison over allegations of plotting to overthrow the Tehran government.

Mrs Zaghari-Ratcliffe has been afforded diplomatic protection by the UK Government, which states that she is innocent and that her treatment by Iran failed to meet obligations under international law. – PA