US faces the worst rate of unemployment since the Great Depression

Former US Vice President Joe Biden has formally clinched the Democratic presidential nomination, setting the stage for a challenge to President Donald Trump in the November election. Video: Reuters 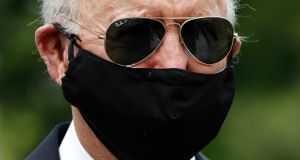 Joe Biden has officially clinched the Democratic Party’s presidential nomination, setting him up to meet Donald Trump for the leadership of a country beset by the coronavirus pandemic and civil unrest.

Mr Biden said in a statement: “It was an honour to compete alongside one of the most talented groups of candidates the Democratic party has ever fielded, and I am proud to say that we are going into this general election a united party.”

The former vice president has been his party’s presumptive nominee since rival Bernie Sanders ended his campaign in April.

But he needed to secure a sufficient number of delegates from elections this week in seven states and the District of Columbia, with a surge in mail ballots making his position official late on Friday.

The moment was met with little of the traditional fanfare as the nation confronts overlapping crises.

While Biden has started to venture out more this week, the coronavirus pandemic has largely confined him to his Wilmington, Delaware, home for much of the past three months.

The country currently faces the worst rate of unemployment since the Great Depression.

And civil unrest that harkens back to the 1960s has erupted in dozens of US cities and spread around the world following the death of George Floyd.

Mr Floyd was a black man who died when a white Minneapolis police officer knelt on his neck for several minutes even after he stopped moving and pleading for air.

It is a confluence of events that no US leader has faced in modern times, made all the more complicated by a president who has at times antagonised the protesters and is eager to take the fight to Mr Biden.

Mr Biden acknowledged on Friday night that it was a “difficult time in America’s history”.

Mr Biden is in the midst of his third bid for the presidency, having spent 36 years as a senator before becoming Barack Obama’s deputy in 2008.

His success in securing the nomination has been attributed to strong support from black voters whose backing he will need in critical swing states if he is to defeat Mr Trump in November. – PA