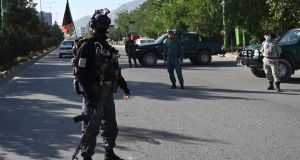 Security personnel at a checkpoint at the start of the Eid al-Fitr in Kabul on May 24th. File photograph: Wakil Kohsar/AFP via Getty Images

Two militant attacks have killed 14 Afghan security personnel in the north-eastern Badakhshan province and the capital of Kabul on Saturday.

A roadside bomb killed 11 security force members in Badakhshan when it tore through a security vehicle responding to attacks on checkpoints in Khash district.

Sanaullah Rohani, spokesman for Badakhshan’s provincial police chief, said a local commander was among the dead and that four militants were killed in the fighting.

Both officials said the Taliban had carried out the attacks, although no one immediately claimed responsibility.

The Taliban did claim responsibility for an attack that killed 10 policemen in the southern Zabul province on Friday. Afghan government officials said the Taliban ambushed an Afghan police convoy on Friday after setting off a roadside bomb.

US forces had carried out two sets of air strikes on Friday against the Taliban in western and southern Afghanistan.

These were the first US strikes following a brief ceasefire declared by the insurgents for the major Muslim holiday of Eid al-Fitr, which marked the end of Ramadan, last month. – PA