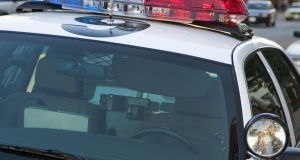 Police in northern California fatally shot an unarmed 22-year-old who was on his knees with his hands up outside a Walgreens store while responding to a call of alleged looting, officials said.

An officer in the city of Vallejo was inside his car when he shot Sean Monterrosa, who was Hispanic, on Monday night amid local and national protests against police brutality. Police said an officer mistakenly believed Mr Monterrosa had a gun, but later determined he had a hammer in his pocket.

The killing of Mr Monterrosa, who was a San Francisco resident, has sparked intense outrage in the Bay Area, particularly in the city of Vallejo, a city with a long history of police violence and high-profile killings and excessive force complaints.

“When confronted by the police, he dropped to his knees and surrendered, and they fired at him,” said Melissa Nold, a Vallejo civil rights attorney representing Mr Monterrosa’s family. “He wasn’t doing anything to warrant it. They shot him from inside their car. What opportunity did they give him to survive that situation? . . . It’s egregiously bad.”

The exact circumstances that led to the killing are unclear, and police have not yet released footage. In a news conference on Wednesday, two days after the killing, police chief Shawny Williams said officers were responding to a call of possible looting at the pharmacy shortly after midnight when an officer in a cruiser drove up and saw a dozen people in the parking lot getting into a car.

A second officer in an unmarked car drove up and found Mr Monterrosa, who was still on the scene, who then kneeled down and started to raise his hands. At this point, the police chief said, this officer “perceived a threat” and fired five shots through his window at Mr Monterosso.

The chief declined to identify the officer who killed Mr Monterrosa, saying only that the officer was an 18-year veteran of the force. The chief also dodged questions about whether he considered the shooting to be excessive force and ignored questions from angry community members who showed up to a press conference. When asked about the merits of shooting through a window, the chief said some officers are trained to shoot through their windshields and said this was allowed under policy.

Mr Monterrosa died at the hospital, the chief said. The last person killed by Vallejo police was Willie McCoy, a 20-year-old who had been sleeping in his car in February 2019 when six officers fired 55 bullets in 3.5 seconds. One of the six officers who killed Mr McCoy, a rising rapper in the Bay Area, had previously killed an unarmed man who was fleeing on his bike.

Another Vallejo officer killed three men in a five-month period and was subsequently promoted.

Vallejo, a city 48km (30 miles) north-east of San Francisco with 121,000 residents, has over the years had a significantly higher rate of killings by police than the national average and other Bay Area cities.

Despite promises of reform in the wake of widespread scrutiny, the killing of Mr Monterrosa and police leaders’ actions in the aftermath suggest that nothing has changed, said Ms Nold, who has long advocated for policy shifts.

A day after the shooting, police and other Vallejo leaders held a news conference about the ongoing protests and the death of George Floyd in Minneapolis, but refused to provide any details about Mr Monterrosa’s killing, saying only that there had been an “officer-involved shooting” and declining to specify whether it was fatal.

“It’s just unfathomable,” said Ms Nold, adding that the news was devastating to many families of people killed by Vallejo police, who were trying to be optimistic about change in the city, since police had not killed anyone for more than a year.

Even though the chief likely knew the circumstances of the killing by the time he held his first news conference, he refused to discuss it, while citizens were continuing to march for Mr Floyd, Ms Nold noted. “We’re protesting for a guy who lived thousands of miles away. And the day we’re marching, our own police are gunning down an unarmed man on his knees.”

While Ms Nold has not yet seen body-camera footage, which police are eventually required to release, and has not yet viewed Mr Monterrosa’s body, she noted that “even their own version of the story is horrific”. The department, she said, has a track record of initially misrepresenting the circumstances of killings, which the public later learns when video is released. Even if police believed Mr Monterrosa was involved in looting, the officers had no evidence of that when they arrived and immediately shot him, she added.

Ms Nold said she was anxious to learn the identity of the officer, given that the force is relatively small and she knows of more than a dozen officers in recent years who have killed more than one citizen.

Mr Monterrosa grew up in San Francisco, where he attended an arts high school and had previously worked at the local Boys and Girls Club, a not-for-profit.

“He was a true native son of San Francisco and Bernal Heights,” said Jake Grumbach, a family friend, who posted a video of Mr Monterrosa speaking at a youth program in the city, where loved ones and local residents gathered on Thursday for a vigil. “He was loved and respected by so many … There is just so much community support and solidarity.”

Vallejo police representatives did not respond to questions. –Guardian