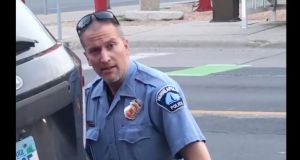 In this file still image taken on May 25th shows Minneapolis police officer Derek Chauvin during the arrest of George Floyd. Photograph: Darnella Frazier/Facebook/AFP via Getty

US police officer Derek Chauvin has been charged with third degree murder and manslaughter in connection with the death of George Floyd in Minneapolis earlier this week.

Derek Chauvin was taken into custody earlier on Friday, said John Harrington, the commissioner for the department of public safety in Minnesota. Mr Chauvin was one of four men fired by the Minneapolis police department earlier this week after Mr Floyd died shortly after being physically restrained by officers who were responding to a phone call from a shop owner.

The death of Mr Floyd, a 46-year-old African American man, prompted violent scenes in Minneapolis and cities across America as demonstrators protested against the death of a black man who had been apprehended by white police officers.

At a press conference on Friday, Minnesota’s governor Tim Walz, who had deployed the US National Guard on Thursday, called for calm.

Derek Chauvin has now officially been taken into custody, according to the Minnesota Bureau of Criminal Apprehension. He is the officer seen with his knee on George Floyd’s neck. #GeorgeFloyd

While he said that the name of George Floyd had now joined the names of other black victims of police violence such as Rodney King and Eric Garner, he said that “We have to restore order to our society before we can turn to [these] issues.”

“We cannot have the looting and recklessness that went on,” he said as he appealed for calm last night.

Mr Walz acknowledged that there was an absence of trust between his community and law enforcement and pledged to tackle the “stain” of “institutional racism.

“These are things that have been brewing in this country for four hundred years,” he said, adding that it was fortuitous that a passerby had filmed the incident on their phone.

In a statement on the death of Mr Floyd, former US president Barack Obama said that while it was natural for many people to want to get back to “normal” after the coronavirus pandemic, “we have to remember that for millions of Americans, being treated differently on account of race, tragically, painfully, maddeningly normal.”

“It falls on all of us, regardless of our race or station, to work together to create a ‘new normal’ in which the legacy of bigotry and unequal treatment no longer infects our institutions or our hearts.”