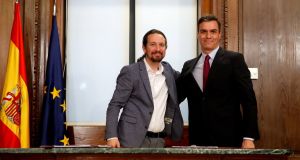 Spain’s Socialists are hoping to break an eight-month political stalemate by forming the country’s first coalition government of modern times.

However, the process could be complicated by renewed tensions between Madrid and Catalan nationalists, following a controversial legal ruling on Friday.

Congress begins an investiture debate on Saturday leading to a vote the next day in which Socialist acting prime minister Pedro Sánchez requires the support of an absolute majority of the chamber to form a new administration. If, as expected, he loses, he will face the easier task of securing a simple majority – more votes in favour than against – in a second ballot 48 hours later.

The Socialists have agreed to govern in coalition with Podemos, to their left, following a November general election. Together the two parties are still short of a majority in the 350-seat chamber so they will require the support of several other parliamentary groups in the investiture vote.

“We don’t have a parliamentary majority, we are perfectly aware of that,” Mr Sánchez said on Monday, as he and Podemos leader Pablo Iglesias signed off on a series of policies they plan to introduce once in government.

“But we have something more valuable than that,” Mr Sánchez added. “That is the will and determination to form a majority day by day, law by law, budget by budget.”

Although coalitions are now common across Spain at a regional and municipal level, there has never been one in the national government in the modern era. Podemos and the Socialists failed to agree on the creation of a new administration earlier this year, following an April election, leading to an extended political impasse and November’s repeat ballot.

Hoping to avoid a third election in a year, the two parties have quickly mended their differences in recent weeks, agreeing to govern together and share cabinet posts.

However, the biggest obstacle in the way of Mr Sánchez’s new administration has been his relationship with Catalan nationalists. The Socialist leader has had to look to a range of smaller regional parties for backing, including the pro-independence Catalan Republican Left (ERC), which has 13 seats and could make him prime minister by abstaining in the final vote.

The Socialists have been locked in talks with ERC in recent weeks, in a bid to persuade them to abstain.

“We are sceptical because we find it hard to believe in the Socialists,” ERC spokeswoman Marta Vilalta said earlier this week. “But this is an opportunity for the independence movement that we have to try.”

On Thursday, ERC’s executive agreed to the abstention, apparently guaranteeing the success of Mr Sánchez’s investiture next week. In exchange, the Socialists promised to engage in talks with the Catalan government, of which ERC forms a part, in an effort to find a resolution to the territorial crisis.

The deal between the two parties stipulates that any consensus they might eventually reach should be voted on by ordinary Catalans. However, a referendum on independence remains off the table, according to the Socialists.

On Friday, ERC’s willingness to abstain was cast in doubt after the electoral board ruled that Catalan president Quim Torra should be immediately removed from office for refusing to remove pro-independence propaganda from his government’s building during local elections. A court found him guilty of disobedience in December, but its decision to bar him from office for 18 months was pending an appeal before the supreme court.

Although the Catalan parliament might be able to maintain Mr Torra in his post, the electoral board’s ruling drew a furious backlash from pro-independence organisations and parties.

Commenting on twitter, former Catalan president Carles Puigdemont described the decision as “outrageous and disgraceful” and compared it to direct rule. ERC’s leadership is due to meet on Saturday to decide on a formal response.

This adds an extra element of uncertainty to what had already promised to be a dramatic investiture for Mr Sánchez.

His reliance on ERC, a party whose leader, Oriol Junqueras, is serving a 13-year jail sentence for his part in a failed independence bid two years ago, had drawn fierce criticism from the political right.

“Sánchez is consummating the betrayal of Spain,” said Pablo Casado, leader of the conservative Popular Party (PP). “He has negotiated a referendum with the criminals who carried out a coup d’état so he can win an investiture vote.”

ERC’s apparent willingness to ease Mr Sánchez’s investiture had also been questioned by factions within the independence movement, including Mr Torra’s Together for Catalonia (JxCat).