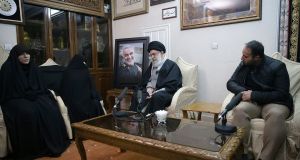 Tehran on Friday night vowed to avenge the killing of its most senior military commander by US forces, prompting fears that the US and Iran could be veering towards military confrontation in the Middle East.

Qassem Suleimani, the head of the Iranian Revolutionary Guards’ elite Quds force, was killed in a targeted US strike as he left Baghdad International Airport early on Friday morning.

Speaking from his Mar-a-Lago residence in Florida, US president Donald Trump said Suleimani had been “plotting imminent and sinister attacks on American diplomats and military personnel”.

“We took action last night to stop a war. We did not take action to start a war,” he said.

However, he warned that he was “ready and prepared to take whatever action is necessary” should American interests be threatened.

US secretary of state Mike Pompeo said the operation had disrupted an “imminent attack” by Iran and “saved American lives”, yet he declined to give specific details. “The risk of doing nothing was enormous,” he said.

Thousands of protesters took to the streets in Iran after the US strike, with some burning US, British and Israeli flags, and chanting “death to America”.

....of PROTESTERS killed in Iran itself. While Iran will never be able to properly admit it, Soleimani was both hated and feared within the country. They are not nearly as saddened as the leaders will let the outside world believe. He should have been taken out many years ago!

A veteran of the Iran-Iraq war, Suleimani was a towering figure in Iran, and the mastermind of the state’s regional policy, which saw it build military alliances throughout the Middle East.

Abu Mahdi al-Muhandis, the commander of the Iranian-backed Kataib Hizbullah in Iraq, was also killed in the targeted attack.

The Pentagon announced the deployment of 3,500 extra US troops to the Middle East, joining the 750 military that were sent to Kuwait in recent days after the US embassy in Baghdad was targeted.

The US state department issued an emergency alert shortly after the strike, advising all American citizens to leave Iraq.

Ireland’s Department of Foreign Affairs advised Irish citizens against all travel to Iraq because of the “extremely dangerous security situation and very high threat of terrorist attacks”.

It advised Irish citizens in Iran to exercise a “high degree of caution, particularly in light of recent unrest”.

The attack also raised questions about the US-Iraq relationship. Iraq’s prime minister Adel Abdul Mahdi called the strike “a brazen violation of Iraq’s sovereignty, and a blatant attack on the nation’s dignity”.

The drone strike came a week after an American contractor died in an attack in Iraq which the US blamed on Kataib Hizbullah. The incident sparked US strikes on sites associated with the group which killed more than 20 people.

Following those strikes the US embassy in Baghdad was stormed by pro-Iranian protesters.

Mr Pompeo spent much of Friday phoning allies across the world, including Britain, Germany and France, as well as regional supporters in the Middle East.

The relatively restrained response from Israel and Saudi Arabia indicated the delicacy of the issue even for Iran’s most strident adversaries.

As senators returned to Washington for the first session since Mr Trump’s impeachment last month, Republicans praised the president’s action. However, Democrats questioned the reasons behind the strike, and demanded details of the intelligence it was based on.

They also criticised Mr Trump for not consulting Congress.

“The president does not have the authority for a war with Iran,” said Senate minority leader Chuck Schumer. “If he plans a large increase in troops and potential hostility over a longer time, the administration will require congressional approval – and the approval of the American people.”