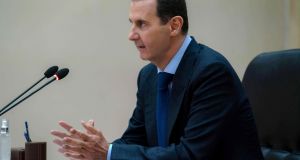 Syrian president Bashar al-Assad has warned that the war-ravaged country could face catastrophe if coronavirus cases exceed the capabilities of the debilitated healthcare system. Arguing that Syria has not escaped “the circle of danger”, he said Syria’s reported 44 cases and three deaths could “suddenly spike in a few days or few weeks”.

Public pressure has forced a partial lifting of last month’s strict curfew and lockdown, permitting a return to work as United Nations and humanitarian agencies contended Syria could face an overwhelming outbreak.

A mass Covid-19 outbreak could add thousands or tens of thousands of Syrians to the death toll inflicted on the country by nine years of warfare. The opposition Syrian Observatory for Human Rights estimates that between March 2011 and March 2020, 116,000 civilians have been killed, nearly 88,000 of them by government forces. Six million have been displaced within the country and six million have become refugees, according to UN figures.

While preoccupied with coronavirus, also known as Covid-19, and an economic crisis, Syria has suffered spikes in attacks from the air and between ground forces. Israeli aircraft entering Syrian air space from the southeast struck pro-Iranian militia positions in Deir al-Zor province and munitions factories and depots east of Aleppo city. In the southern Deraa province, nine policemen were abducted from a municipal building and killed by unidentified gunmen.

Although recaptured by the Syrian army in 2018, Deraa remains lawless and subject to raids by Islamic State, also known as Isis, and clashes between rival militias. Al-Qaeda-led jihadis continue to spar with the Syrian army in northwestern Idlib province and with rival factions.

Human Rights Watch has reported that an unknown number of bodies were dumped by Isis in northern Syria’s al-Hota gorge, a natural beauty spot formerly held by Isis and currently controlled by Turkish-surrogate fighters. Human Rights Watch revealed that some bodies had been dumped into the gorge after the defeat of Isis, which executed opponents and consigned their bodies to 20 mass graves.

On the political front, a bitter rift has opened up between Mr Assad and his billionaire cousin Rami Makhlouf, who claimed on Facebook that the government has detained his employees in a campaign to take over his businesses, including the lucrative mobile firm Syriatel, which have dominated the Syrian economy for 20 years.

Pressure on Mr Makhlouf and other tycoons has been exerted since last autumn when they were, reportedly, summoned to the Sheraton Hotel in Damascus and ordered to bankroll the cash-strapped state and prop up its depreciating currency. He has said he has been ordered to pay €206 million but will not cede his position at Syriatel, one of two mobile service providers.

The super-rich are not alone in being targeted. Rates have also increased on Syria’s struggling companies in order to fund electricity, water, fuel and public servants’ salaries.