Questions over how tests counted as government accused of massaging figures 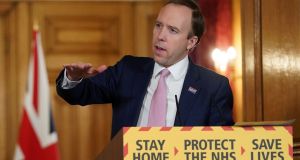 Britain’s health secretary Matt Hancock has claimed to have met his goal of increasing coronavirus testing to 100,000 a day by the end of April. Photograph: Pippa Fowles/AFP via Getty Images

Britain’s health secretary Matt Hancock has claimed to have met his goal of increasing coronavirus testing to 100,000 a day by the end of April despite questions over how the tests were counted. Mr Hancock said 122,347 tests were carried out in the 24 hours up to 9am on Friday, more than twice the number being conducted daily at the start of the week.

“A big increase in testing provides a way to unlock the puzzle of the coronavirus and testing forms the first element of our plan to test, track and trace. By mid-May, we will have an initial 18,000 contact tracers in place. That work is under way as we speak and if it needs to be bigger we will scale it as required.

Mr Hancock said he knew the goal of 100,000 tests a day was an audacious one when he set it last month, hailing co-operation between public health authorities and private enterprise in reaching it. But Labour’s shadow health secretary Jonathan Ashworth accused the government of massaging the testing figure because almost a third of the total were testing kits sent out by post but not yet returned.

“Labour has repeatedly called for more testing, and increasing testing is an important milestone. But many would have expected the 100,000 promise to have been met by actually carrying out testing, not simply because 39,000 kits had been mailed out. Tonight’s headline figure shouldn’t count tests that hadn’t been used, or indeed, might never be used as a completed test. Ministers promised transparency – the public and NHS staff deserve clarity,” he said.

A total of 27,510 people have died in Britain after testing positive for coronavirus, an increase of 739 since Thursday and the highest death toll in any European country apart from Italy. Boris Johnson said this week that Britain had passed the peak of coronavirus infections and his government will next week outline the next stage in its strategy, although the lockdown is expected to remain.

The number of people with coronavirus in hospital is falling but Martin Green, chief executive of Care England, said on Friday that the peak of deaths in nursing homes is ahead.

“We are a long way behind, because despite what the health secretary says, about us being always regarded as a priority, well clearly we weren’t. Clearly we weren’t at the centre of this pandemic. So I just think the government needs to understand that, if they knew in January we were the high-risk area,” he said.