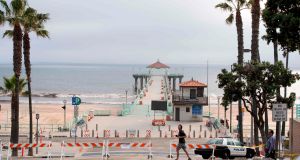 The number of known deaths from coronavirus has exceeded 217,000 globally, according to Johns Hopkins University researchers, and at least 3,116,680 people have been infected worldwide.

Here are the latest updates on the virus, also known as Covid-19, from around the world:

The number of coronavirus cases in the United States has passed one million, accounting for nearly a third of the total cases worldwide, according to the John Hopkins researchers.

States are beginning to lift their restrictions as the national death toll from Covid-19 surpassed 58,000.

In Georgia, businesses such as barber shops and tattoo parlours were given the go-ahead to reopen.

Mixed messages are also coming from the US Congress.

The House is scrambling for ways for members to work from home after a revolt over convening during the pandemic, and said they would not return to the Capitol on Monday. The smaller Senate, however, plans to convene there.

Britain will include deaths in nursing homes and at home in its daily coronavirus death toll from Wednesday as new evidence suggested the overall number of deaths is much greater than the official daily number of those who died in hospitals.

On Tuesday, it was reported that a total of 21,678 people had died of coronavirus in hospitals in Britain, an increase of 586 since Monday. But new figures from the Office for National Statistics (ONS) show that one in three of those dying of coronavirus are in nursing homes.

The latest figures also show that more people died in Britain in the week beginning April 10th than in the equivalent period since comparable data has been collected in 1993. That week 22,351 died, more than twice the average for the period over the previous five years.

Britain has recorded the highest daily number of deaths from coronavirus of any European country every day for almost a week.

Officials in South Korea have issued public pleas for vigilance to maintain hard-won gains against coronavirus as the nation enters its longest holiday since infections surged in February.

Vice health minister Kim Gang-lip on Wednesday said 180,000 people are expected to visit the resort island of Jeju during a six-day break from Thursday to Tuesday, despite the island government pleading with travellers not to come.

Hotels and other accommodation facilities are nearly fully booked in some seaside towns in Gangwon province, which hosted the Winter Olympics in 2018.

Mr Kim urged travellers to wear masks, not to share food and stay at home if they have fever or respiratory symptoms.

Gangwon has increased the number of thermal cameras at railway stations, bus terminals and highway rest areas. Jeju plans to expand temperature checks at its airport and conduct virus tests on travellers with even mild fevers above 37.3 degrees.

Spain aims to remove most restrictions on daily life and return to a “new normal” over the next eight weeks, prime minister Pedro Sanchez has said.

The process will be subject to data on the number of Covid-19 infections and won’t follow a strict calendar, Mr Sanchez said in a televised address. Schools will not return until September.

Each province will ease curbs on activity at its own pace in accordance with its particular situation, said Mr Sanchez.

After a six-week lockdown that has crippled the economy, the health ministry earlier reported a drop in the number of new virus cases and deaths, continuing a trend of steady decline in the nation with Europe’s most extensive outbreak.

According to Reuters, Spain has recorded 228,627coronavirus cases to date, and 23,822 people have died.

China’s parliament is set to hold its annual meeting on May 22nd, the official Xinhua news agency reported on Wednesday, more than two months later than originally planned.

China’s top political consultative body, the Chinese People’s Political Consultative Conference, has also proposed to start its annual session on May 21st. It is not clear yet how long the meetings will last. They traditionally see more than 5,000 delegates descend on Beijing from all over China for at least 10 days.

China reported zero new deaths as of the end of April 28th. There were 26 new asymptomatic cases, down from 40 the day before, but 21 new imported cases, compared to three a day earlier, and 22 cases in the mainland.

Australia plans to expand screening for the coronavirus after securing 10 million more test kits on Wednesday, a measure officials said is key to sustaining low transmission rates and allowing restrictions on social movement to be eased.

Australia has credited a partial lockdown and testing with bringing the rate of new infections down to below 1 per cent. Home to 25.7 million people, it has recorded about 6,700 cases of coronavirus and 88 deaths.

Authorities plan to use the new supply to expand testing this week to include people without systems, ramping up from around 500,000 tests conducted over the past month.

Meanwhile, Australian prime minister Scott Morrison has defied China and defended the “entirely reasonable and sensible” call for an investigation into the origins of Covid-19.

While Australia has eschewed the more strident approach of the US, which has stopped funding to the World Health Organisation (WHO), it has urged its allies to back an overhaul of the WHO and suggested recruiting independent investigators akin to “weapons inspectors” to determine the source of major disease outbreaks.

New Zealand was under a strict lockdown that saw offices, schools, malls, restaurants, playgrounds and all other public areas shut for more than a month. The lockdown was lifted on Tuesday.

The Pacific country reported two new confirmed cases of Covid-19 on Wednesday, taking the total to 1,126, and 19 deaths, far lesser than many other countries as it successfully contained the virus by locking down its borders and its economy.

Tokyo governor Yuriko Koike has called for an extension of Japan’s nationwide state of emergency, which requests people to stay home and social distance, to stem the spread of the outbreak.

She noted reported daily cases of Covid-19 in the capital have topped 100 recently.

Japan has had about 400 deaths so far nationwide, 100 of them in Tokyo.

The state of emergency, declared by prime minister Shinzo Abe, lasts until May 6th, which marks the end of the Golden Week holidays that began this week.

The government has asked people not to travel during the holidays, but there is no lockdown in Japan, and some businesses and restaurants remain open.

Mexico’s interior department is urging towns and states to stop putting up roadblocks and curfews to stem the spread of coronavirus, as hundreds have done.

The department said in a statement that such measures violate constitutional rights like the right to free movement, and argued that local governments do not have the authority to enact them.

“The health emergency does not constitute a state of emergency or suspension of rights,” the department wrote.

The department said in a report that almost 20 per cent of Mexican municipal governments, about 340, have put up checkpoints or filters to limit people’s movements. Most were concentrated along the coasts, where many beach towns have tried to exclude travellers.

Dozens of towns have enacted curfews and at least three of the country’s 31 states have threatened to arrest people who do not obey social distancing measures.-Agencies