Amash may join race for US presidency as Libertarian candidate 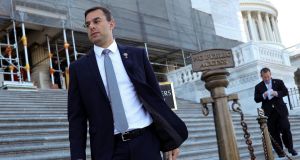 The US presidential race took an unexpected turn on Wednesday when Michigan congressman Justin Amash announced that he is considering a run as a Libertarian candidate.

Mr Amash (40) made headlines last year when he left the Republican party in protest at Donald Trump’s presidency. Since then he has represented his Michigan district in Congress as an Independent, voting with Democrats to impeach Mr Trump last December.

Though a long-shot bid, his arrival in the race could influence the outcome of November’s presidential election.

The Libertarian movement – which promotes individualism, civil liberties and minimal state intervention – is a niche but influential movement in the United States.

Like other so-called third parties including the Green Party, it also has a history of making trouble for mainstream presidential candidates in election years.

Ross Perot, who ran as an Independent in 1992, won an impressive 19 per cent of the vote, upending the dynamics of the presidential race between George HW Bush and Bill Clinton.

Eight years later, Ralph Nader was widely seen as helping tip the election in George W Bush’s favour having siphoned off votes from Democrat Al Gore in an election that went down to the wire.

Most worrisome for this year’s candidates is the lesson of four years ago, when Libertarian candidate Gary Johnson may have helped put Mr Trump in the White House. While the former New Mexico governor captured just over 3 per cent of the national vote in 2016, he performed well in some crucial battleground states which Mr Trump narrowly won over Hillary Clinton.

With Mr Amash most likely to be on the ticket – the Libertarian primary is due to select its candidate at a convention next month, coronavirus permitting – it remains to be seen what impact his entry will have on the race.

Democratic congressman Brendan Boyle was one of the first to weigh in, warning that he could help Mr Trump’s re-election processes. “For the good of the country I urge you to reconsider,” he tweeted.

Some traditional Republicans who dislike Mr Trump and were considering voting for Mr Biden may opt for Mr Amash instead. But others point out that Mr Amash may siphon off votes from Mr Trump, because of his impeccable conservative credentials.

As both political campaigns digest the implications of a new entry into the race, Mr Biden’s campaign was continuing to roll out endorsements this week.

On Tuesday Ms Clinton became the latest party stalwart to endorse her former colleague, joining the former vice-president on a virtual livestream event.

Highlighting Ms Clinton’s endorsement is a risky move. She still commands huge support, particularly among women voters aggrieved at her loss to Mr Trump four years ago. But she is also a divisive figure whom some blame for the party’s loss in 2016 due to her inability to connect with working-class voters in crucial swing states.

Mr Trump’s campaign also evidently view Ms Clinton’s support as a liability for Mr Biden. Within minutes of her announcement, Trump campaign manager, Brad Parscale, said that both Mr Biden and Ms Clinton carried “the baggage of decades in the Washington swamp and both of them schemed to keep the Democrat nomination from Bernie Sanders”.

“President Trump beat her once and now he’ll beat her chosen candidate,” he declared.

Mr Trump’s sons Eric, Donald jnr and the president himself weighed in on Twitter, with Donald jnr reviving the “crooked Hillary” moniker.

Ms Clinton’s endorsement also coincided this week with increased scrutiny of a sexual assault allegation against Mr Biden made by a former employee. Tara Reade, who worked for Mr Biden in the Senate, has alleged that the then senator harassed and assaulted her in the early 1990s.

The accusations surfaced when Mr Biden announced his candidacy a year ago, but this week Business Insider said that two sources had corroborated Ms Reade’s account.

Mr Biden’s campaign has denied wrongdoing, but the resurfacing of the allegations has put many of his most prominent female supporters in a tricky position.

Asked this week about the allegations, Michigan governor Gretchen Whitmer, a possible vice-presidential pick, said that women’s stories should be heard, but avoided mentioning Mr Biden. Other prominent supporters such as senators Kirsten Gillibrand and Amy Klobuchar also equivocated.

With the race for the White House entering its final six months, it is becoming clear that Mr Biden will have to directly answer questions about the allegations sooner rather than later.