The eyes lost it: Girl with a Pearl Earring shed her eyelashes, scan shows

Artist not working from imagination, but ‘faithfully painting a real person in a real place’ 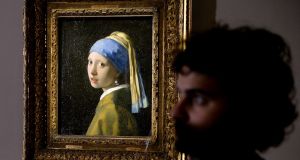 The iconic gaze of the world’s second most enigmatic female, Johannes Vermeer’s 17-century masterpiece Girl with a Pearl Earring, may not always have been as cool and direct, some say empowering, as it appears today.

New research by international experts using state-of-the-art scanning and imaging technology shows for the first time that when the portrait was completed about 1665 the gaze was softened somewhat by eyelashes that have gradually disappeared over time.

The research, carried out jointly by the Mauritshuis – the gallery in The Hague where the painting has featured in the royal collection since 1902 – Delft university and the Shell technology centre in Amsterdam, casts valuable new light on Vermeer’s style of composition.

He began the painting in boldly executed black and brown brush strokes, before adding the colour, working systematically from the background to the foreground, according to Abbie Vandivere, who led the research project, entitled The Girl in the Spotlight.

The project also focused on Vermeer’s love of the deep blue pigment ultramarine, which he used unstintingly in the head scarf and the girl’s coat – although it would have been more expensive than gold when it was imported from Afghanistan for the artist at the height of his powers.

Analysis of microscopic paint samples also shows for the first time that the white lead used in the earring was imported from closer to home – the Peak District in northern England.

However the two most significant discoveries were that the painting originally included eyelashes, and that what now appears a dark background started life as a green pleated curtain which lost its colour over the centuries.

Under intense magnification, however, some small hairs remain around the eye

The absence of the eyelashes was put down by experts to the possibility that Vermeer was painting an idealised face in a slightly abstract style. Under intense magnification, however, some small hairs remain around the eye.

Both discoveries show that Vermeer was not working from imagination, but was “faithfully painting a real person in a real place”, says Vandivere.

As to who exactly the painting’s subject – often known as “the Dutch Mona Lisa” – actually is, even a battery of high-tech tests by the world’s leading experts doesn’t bring us any closer to solving that fundamental mystery.

“No, we still have absolutely no idea of her identity,” admits the director of the Mauritshuis, Martine Gosselink. “But this has brought us closer to her. I think that now we know her better.”