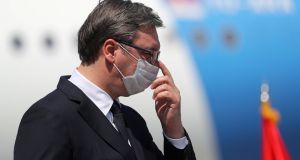 Serbia has set a new date for parliamentary elections in June and is expected to cancel its state of emergency over coronavirus on Wednesday, as it joins much of central Europe and the Balkans in stepping up the pace of its exit from lockdown.

Slovakia has decided to merge the second and third phases of its reopening of the economy, and on Wednesday will allow larger shops, hotels, hairdressers and the outdoor seating areas of restaurants to welcome back customers.

Neighbouring Czech Republic, meanwhile, has announced that international train and bus travel can resume from next Monday, and seasonal workers from outside the European Union can enter the country to help with the harvest and in health and social care. May 11th is also the date when Czech cinemas are scheduled to reopen their doors, with a maximum of 50 people allowed at any screening.

“After these difficult times, we have to create a democratic atmosphere and select an assembly and government that will serve in the interest of the people,” Serbian president Aleksandar Vucic said in naming June 21st as the date for parliamentary elections originally scheduled for April 26th.

Mr Vucic said the continuing risk of coronavirus would probably prohibit any major campaign events in May, and he pledged to “personally ask” his populist Serbian Progressive Party to “to conduct the campaign in a spirit of tolerance and responsibility”.

Serbia allowed some shops, restaurants and cafes to reopen on Monday but a daily curfew has remained in place as part of one of the strongest lockdown regimes in the region. Parliament is expected to vote for an end to the state of emergency on Wednesday, however.

“There are two conditions for abolishing the state of emergency – to record a daily rise of newly confirmed cases of below 5 per cent for seven days in a row, and to have a significant drop in the number of patients on mechanical ventilation. We meet both conditions,” Mr Vucic said.

“We will propose to parliament to abolish the state of emergency on . . . May 6th. If the decision is immediately published in the official gazette, we will have no curfew as of Thursday.”

Serbia registered 120 new cases on Tuesday, bringing its total to 9,677. The virus is now known to have killed 200 people in the country of about 7 million.

Slovakia has recorded just 1,421 cases of coronavirus and 25 fatalities, having been quick to impose lockdown, make it mandatory to wear face masks in public places, and use targeted quarantine measures to tackle virus “hotspots”.

“We have been successful above expectations . . . but we still must remain very careful,” said Slovak prime minister Igor Matovic, whose new coalition government took office on March 21st as the pandemic took hold in Europe.