French hospital discovers it had case of coronavirus in December 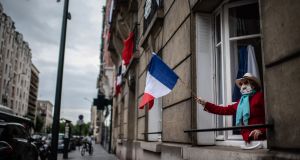 A woman waves the French national flag in support of healthcare employees in the Paris suburb of Saint-Mande on Monday. Photograph: Martin Bureau/AFP via Getty Images

French doctors have discovered that Covid-19 was already present in France in late December 2019, a month before what were previously believed to be the first cases in the country.

“Identifying the first infected patient is of great epidemiological interest as it changes dramatically our knowledge regarding SARS-COV-2 and its spreading in the country,” seven French doctors wrote in an article published online by the International Journal of Antimicrobial Agents on May 3rd.

“Moreover, the absence of a link with China and the lack of recent travel suggest that the disease was already spreading among the French population at the end of December, 2019,” the authors conclude.

Previously, the first known cases of Covid-19 in France dated from January 24th. They were a Chinese couple from Wuhan and a man returning to Bordeaux from China.

The authors describe the patient as a 42-year-old fishmonger born in Algeria, who has lived in France for many years. His last trip abroad, to Algeria, occurred in August 2019. One of his four children presented with flu symptoms prior to his illness.

French media on Tuesday identified the man as Amirouche Hammar, a resident of Bobigny, north of Paris. Mr Hammar told BFM TV he suffered from a dry cough, fever, fatigue and serious difficulties in breathing.

Mr Hammar thought he had flu and did not worry at first. But by 5am on December 27th, he felt so unwell that he drove himself to hospital. “They told me what I had was very serious,” he said.

Because the symptoms of flu and Covid-19 are similar, doctors decided to re-examine the files of all patients hospitalised in intensive care for pneumonia at Avicenne and Jean-Verdier hospitals between December 2nd and January 16th.

The doctors excluded 110 of 124 nasopharyngeal samples, either because the patients tested positive for flu or common coronaviruses, or because they did not present the symptoms of Covid-19. The samples are frozen at minus 80 degrees and stored for four years, in case further analysis is needed.

Of the remaining 14 samples, only one, Mr Hammar’s, tested positive for SARS-COV-2, the virus which causes Covid-19.

Mr Hammar’s wife Fatiha works with Asians at the fish counter in a supermarket near Roissy-Charles-de-Gaulle airport. She showed no symptoms but doctors suspect she was a passive carrier. “We serve clients who come directly from the airport with suitcases,” Ms Hammar told BFM.

The authors cite two recent studies suggesting that between 18 and 23 per cent of people infected with SARS-COV-2 are asymptomatic, and about 55 per cent of infections are caused by unidentified infected persons.

“Our results strongly support these two assumptions, suggesting that many asymptomatic patients were not diagnosed during January 2020 and contributed to the spread of this epidemic,” they write.

Mr Hammar was hospitalised for three days, diagnosed with a pulmonary infection and treated with antibiotics. He made a full recovery, but fears he may have unwittingly infected others.

Mr Hammar did not learn that he may have been the first Covid-19 patient in France until he was contacted by Professor Yves Cohen in the third week of April.

Prof Cohen works in the intensive care units of Avicenne and Jean-Verdier hospitals and was one of the authors of the study.

The study confirms the suspicion on the part of many scientists that Covid-19 circulated in Europe earlier than was previously thought. “We guessed as much, because it’s more or less what happened in China,” Professor Olivier Bouchaud, the head of infectious diseases at Avicenne hospital, told Agence France Presse. “This virus has the particularity of spreading quietly among the population, without its presence being felt until later.”

Dr Cohen said there is no certainty that Mr Hammar is the “patient zero” who scientists strive to identify. “There may be others in other regions,” he said, adding that the files of all pneumonia patients who did not test positive for an identifiable disease at the time should be re-examined.