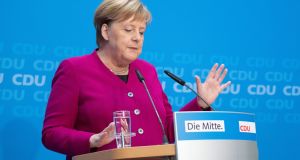 German chancellor Angela Merkel during a press conference after the board meeting of Christian Democratic Union (CDU) party in Berlin, Germany, on Monday. Photograph: Omer Messinger/EPA

The race has begun to succeed Germany’s Angela Merkel as chair of her centre-right Christian Democratic Union (CDU) after she announced her decision to stand down in December after 18 years.

Dr Merkel said on Monday she intended to stay on as chancellor – a role she described as a “daily honour and challenge” – until her fourth-term ends in 2021. But she admitted dissatisfaction with her grand coalition’s “unacceptable” performance after a year in office.

“I am certain the time has come to open a new chapter,” said Dr Merkel (64) at lunchtime on Monday. As well as her decision to stand down as CDU leader, she confirmed that her fourth term as chancellor would be her last and that she was not interested in any further political role. “I once said I was not born as chancellor, and that is something I have never forgotten.”

Dr Merkel said she had decided to stand down as party leader over the summer but had brought forward the announcement after her party scored another disastrous result in a regional election on Sunday.

Amid growing political pressure, Dr Merkel decided to take what she described as a “big risk“: to separate the roles of chancellor and party leader she believes belong together. Two candidates have announced their interest in succeeding her, with two more considering a leadership bid.

Her Social Democrat (SPD) coalition partners, after another historic election disaster at the weekend, insisted Dr Merkel’s decision would have no effect on the federal government in Berlin.

Amid growing voter dissatisfaction, however, on everything from housing to looming diesel bans, it is far from certain if this government will hold for three more years.

Happiest of all on Monday were the opposition, far-right Alternative für Deutschland. Its leaders claimed their election night promise last year, to “hunt down” mainstream political parties, had, in Dr Merkel, claimed its first victim.

Next month, just five days after the CDU elects a new leader, the German chancellor, as head of government, is scheduled to attend a crunch EU summit on Brexit.

Monday’s decision is the beginning of the end of a career that began in 1990 when Dr Merkel, an East German-raised physicist, entered politics and was promoted immediately to Helmut Kohl’s cabinet table.

After he lost power in 1998, and dragged the CDU into an illegal political donations scandal, Dr Merkel was the first to distance herself from her mentor to seize the party leadership in 2000.

After a narrow election win in 2005 she formed a grand coalition, only the second in post-war history. Now on her third such coalition in four terms, she lead Germany in the euro crisis to unprecedented political influence in Brussels.