Lara Marlowe: The Jamal Khashoggi I knew was a chameleon 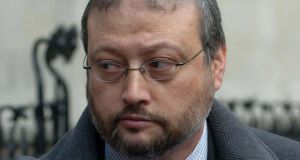 'I knew few people as skilled at explaining the mood of the Arab street and the intricacies of Arab politics' as Jamal Khashoggi, above. Photograph: Johnny Green/PA Wire

I first met Jamal Khashoggi in January 1992, when we were both covering the military coup that prevented the Islamic Salvation Front winning parliamentary elections in Algeria.

In the coffee shop of the El Djazair Hotel, Jamal told me about an exciting young preacher who had helped to drive the Soviets out of Afghanistan and who was building a following across the Arab world. His name was Osama bin Laden. Jamal had interviewed him, and helped western correspondents meet bin Laden in Sudan and later in Afghanistan.

It would be easy to misunderstand Jamal’s admiration for the man who would mastermind the 9/11 attacks. Our conversation took place seven years before al-Qaeda bombed US embassies in Kenya and Tanzania, and nearly a decade before 9/11. When I met Jamal, bin Laden and the mujahideen he led in Afghanistan had not completed the transformation from CIA and Saudi proteges into the world’s most wanted terrorists.

Bin Laden was incensed that the Saudi royal family had invited tens of thousands of “infidels” to the cradle of Islam to combat Saddam Hussein in 1991. Bin Laden’s two main arguments – that the House of Saud was corrupt and unworthy to guard the holy places, and that the US played a destructive role in the Middle East – were immensely appealing to many Arabs, including Jamal.

After Jamal’s death, the New York Times reported that he mourned the assassination of Bin Laden by US commandos in Pakistan in 2011. “I collapsed crying a while ago, heartbroken for you, Abu Abdullah, ” Jamal tweeted, referring to bin Laden as “father of Abdullah”. “You were beautiful and brave in those beautiful days in Afghanistan, before you surrendered to hatred and passion.”

To me, Jamal Khashoggi was just a friendly, helpful colleague whom I was pleased to run into when reporting stories. I knew few people as skilled at explaining the mood of the Arab street and the intricacies of Arab politics. He somehow embodied more than half a century of Arab history: frustration and impotence over the fate of the Palestinians; the temptation of radicalism; the necessity of finding a modus vivendi with dictators; the search for an accommodation between religious faith and freedom.

The last time I saw Jamal, more than 20 years ago, we had lunch in Cairo with his Saudi wife, from whom he was divorced at the time of his death. She was a pretty, petite woman, dressed from head to toe in a white headscarf and long-sleeved robe. We spoke briefly about their children, after which talk turned to Middle Eastern politics and she fell silent.

In Algiers, Jamal wore slacks and a jacket, as he did on October 2nd, when he entered the Saudi consulate in Istanbul. In Cairo he wore a long, white Saudi dishdasha and Arab headdress. It was as if he became more Arab, more Muslim, the closer he travelled to the heart of the Arab and Muslim world. He was a chameleon who impressed western friends with his easy-going manner and the English he mastered at Indiana State University. Muslims noticed his piety.

He was by no means a zealot. The New York Times published a photograph of him at a Thanksgiving dinner in Washington last year. There were a half dozen wine bottles on the table, yet Jamal tweeted the photo to his 1.7 million followers – something no Islamic fundamentalist would ever do.

Jamal lived astride fault lines between east and west, and between establishment and radical Islam. Any seismologist will tell you that the fault line is the most dangerous place to be. To advise Saudi princes, as Jamal did, was a plunge into shark-infested waters.

Jamal supported the Muslim Brotherhood, which was mercilessly repressed in Egypt and Syria over decades. The Saudi monarchy also supported the Brotherhood, until it backed Marshal Abdel Fattah el-Sisi’s overthrow of Egypt’s democratically elected president, Mohamed Morsi, in 2013.

If Christian democracy was possible in Europe, why could Arabs not be ruled by Muslim democracy, Jamal asked. That may explain his friendship with Turkish president Recep Tayyip Erdogan, who on Tuesday denounced Jamal’s “savage murder” by the Saudis. Erdogan constituted the greatest hope of Muslim democracy, until he too turned into a despot.

It’s a strange feeling to learn that a colleague you knew and liked died atrociously. I have been surprised and heartened at the scale of the international reaction to Jamal’s murder. One hopes that something good may come of it. Angela Merkel’s announcement that she is halting all arms sales to Saudi Arabia is a positive sign.

The disgrace of the Saudi crown prince could foil Donald Trump’s hopes of “regime change” in Iran. And it is just conceivable that Jamal’s death may hasten the end of the disgraceful war that has claimed at least 10,000 lives in Yemen.