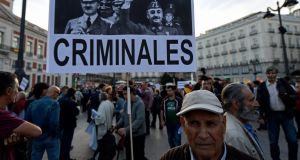 A placard displaying pictures of Franco and Hitler during a rally in Madrid, held last week against the proposal of moving Franco’s remains to Madrid’s Almudena Cathedral. Photograph: Oscar Del Pozo/AFP/Getty Images

The Vatican has denied a Spanish government claim that the Catholic Church will help try to find a suitable burial site for the remains of the dictator Francisco Franco.

Spanish deputy prime minister Carmen Calvo met the Vatican’s secretary of state, Pietro Parolin, on Monday to discuss a range of issues. Among them was the fate of Franco’s remains, which the Socialist government has promised to remove from the dictator’s controversial mausoleum, the Valley of the Fallen, in the mountains north of Madrid.

The government had hoped that the body of Franco, who ruled Spain from 1936 until his death in 1975, would be reburied at a less divisive site.

However, the plan has looked in danger of backfiring due to the insistence of Franco’s grandchildren that he be buried in la Almudena cathedral in central Madrid, where the general’s daughter was buried last year. The government fears that if the dictator is laid to rest there, the cathedral will become a pilgrimage site for right-wing extremists.

“What we agreed was that the government and the Catholic Church would work together to find a solution, which obviously cannot involve la Almudena,” Ms Calvo said on Tuesday, of the meeting with Cardinal Parolin.

Her comments suggested the Vatican would take an active role in ensuring the reburial takes place somewhere other than inside the cathedral.

However, shortly after Ms Calvo’s comments, the Vatican appeared to contradict her. In a statement, Vatican press secretary Greg Burke said that Cardinal Parolin “does not oppose the exhumation of Francisco Franco, if the relevant authorities have decided on it, but at no time did he comment on the place of burial”.

The Spanish church had previously said it was unable to prevent the Franco family from choosing the cathedral as the resting place, arguing that it “cannot deny that right to a Christian”. Church sources quoted in the Spanish media expressed surprise at the deputy prime minister’s latest announcement.

The Vatican did, however, say that it was in favour of dialogue with the Franco family in a bid to solve the situation.

The government, which took office in June, had originally said that Franco would be exhumed and buried elsewhere by the end of the summer, but legal issues have hampered the process. This latest development threatens to exacerbate what had already threatened to become a deeply embarrassing episode for the government of Pedro Sánchez.