Guards accused of rape and torture of migrants arrested in Italy 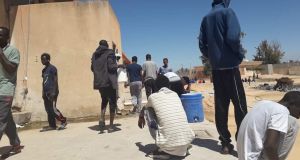 Refugees and migrants at Zawiya detention centre, in the northwest of Libya, in early 2019.

Three men accused of torturing and raping refugees and migrants in Libya have been arrested in Italy. They include a 22-year-old Guinean man and two Egyptians, aged 24 and 26.

A 37-page report, written by the prosecutor’s office in Palermo and seen by The Irish Times, documents allegations of sexual and labour exploitation, extortion and murder. It says the abuse took place inside Zawiya detention centre, in Libya’s northwest.

The men were identified by dozens of refugees and migrants, who eventually crossed the Mediterranean to safety in Europe.

The Irish Times is in contact with refugees still being held in detention in Zawiya, who welcomed the arrests but say torture and abuse is ongoing.

“People are still tortured, beaten, [made into] slaves and sold like a goat,” one man messaged on Monday, using a hidden phone. “It’s clear how many prisoners are dead from secret torture and poor medication, even [a] lack of nutrients, food. We hear in the middle [of the] night noisy screaming sometimes in the locked hanger.”

He said at least 20 detainees had recently been sold back to traffickers. “This place is the most dangerous,” he said.

In one incident, when people tried to escape, the guards opened fire on them, he said. One man was shot dead while another was badly wounded.

The refugee’s testimony has repeatedly been confirmed by other sources.

UNHCR has repeatedly been criticised by other aid workers, who accuse the agency of downplaying the scale of abuse and its own ineffectiveness to secure funding from the European Union.

For 2½ years, the EU has been supporting the Libyan coast guard to intercept boats on the Mediterranean and forcibly return refugees and migrants to Libya, where they are detained indefinitely in conditions that have been condemned by human rights groups.

Refugees and migrants who arrived in Zawiya in April said they were immediately met with threats and aggression by management and armed guards, and told how they would only see sunlight again after they paid substantial amounts of money.

Meanwhile, on Saturday, 82 refugees and migrants disembarked in Italy after they were saved off the Libyan coast by the Ocean Viking boat. This is the first time this year an NGO ship has been allowed disembark rescued people there, and marks a reversal of the country’s anti-immigration policies enforced by former far-right interior minister Matteo Salvini under its new ruling coalition.

1 ‘I thought it was a hoax’: Patient dies after Texas Covid party
2 White House turns its fire on Anthony Fauci over Covid-19 comments
3 Quarantine process to be tightened as health officials grow nervous
4 Maureen Dowd: Biden has his limitations but he’s no Trump
5 Dirty money: How the Mafia plundered Italy’s public health system
Real news has value SUBSCRIBE