Trump continues to back Brett Kavanaugh after fresh allegations emerge 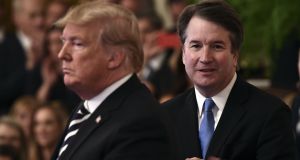 US president Trump participates in the swearing-in ceremony of Brett Kavanaugh (R) as Associate Justice of the US Supreme Court at the White House in Washington, DC. File Photographh: Brendan Smialowski /AFP/Getty Images

Almost a year after Brett Kavanaugh was sworn in as a US supreme court justice, President Donald Trump’s controversial pick to join the highest court in the land is back in the spotlight.

Kavanaugh’s nomination process last year was overshadowed by allegations by Christine Blasey Ford, a university professor, that she had been sexually assaulted by him at a high school party in the 1980s. The dramatic public testimony which saw Kavanaugh and his accuser appear before the Senate judiciary committee gripped the nation. Ultimately, Kavanaugh was confirmed by the Senate, albeit by the smallest margin in 130 years.

Now the 54-year-old is facing fresh allegations that have prompted several Democratic presidential nominees to call for his impeachment.

The new controversy has erupted with the publication of a new book on Kavanaugh by two New York Times journalists. An excerpt from The Education of Brett Kavanaugh: An Investigation was published by the newspaper in its Sunday edition.

It contains two allegations of sexual assault – one by Deborah Ramirez, who claims Kavanaugh exposed himself to her at a party when they were both students at Yale, and a second, previously unknown allegation from a classmate of Kavanaugh who says he witnessed the future supreme court judge expose himself to a woman at another party.

The controversy deepened following the article’s publication after the New York Times updated its online version of the article with an editor’s note. It stated that the article had not included information contained in the book that the female student at the heart of the new allegation declined to be interviewed and that her friends said that she did not recall the incident.

Republicans – and Trump – seized on the clarification as evidence of bias against Kavanaugh. Trump urged him to sue. “The one who is actually being assaulted is Justice Kavanaugh - Assaulted by lies and Fake News!”, he raged on Twitter, accusing the “LameStream Media” of working with their partner, the “Dems” (Democrats).

He raised the issue at a campaign rally in New Mexico on Monday night. “Look at what they are doing today to Justice Kavanaugh,” he told the crowds, calling for the resignation of “everybody at the New York Times involved in this”.

That the classmate who claimed he witnessed the previously unreported incident is a well-known Washington DC lawyer called Max Stier, a Trump critic who has some links to the Clintons, has further incensed Trump supporters.

Democrats have hit back, claiming that by focusing on the newspaper’s clarification Republicans are trying to divert attention from the substance of the fresh claims.

The new information contained in the book makes for uncomfortable reading for Kavanaugh’s defenders.

At the very least, the published excerpt raises questions about the scope of the original investigation into Kavanaugh’s behaviour that was opened by the department of justice at the time of the Blasey Ford controversy.

In its interview with Ramirez, the book claims that her legal team gave the FBI a list of at least 25 individuals who have had corroborating evidence about her allegation. The FBI did not interview any of those people, some of whom unsuccessfully tried to contact the bureau themselves.

Further, it emerged on Monday that Democratic senator Chris Coons knew about the Stier allegations and wrote to the FBI last autumn urging the agency to examine the matter, but that this was not followed up.

Democrats are now calling the original investigation a whitewash.

Many have called for impeachment proceedings to begin. However, this seems unlikely, given that Republicans control the Senate. Further, Jerry Nadler, the Democrat in charge of the House judiciary committee also signalled his lack of interest in pursuing the matter, pointing out that the committee was busy trying to secure information relating to Trump, which could lead to impeachment proceedings against the president.

Other Democrats are wary of returning to an issue that some believe ultimately benefited Republicans in last year’s midterm elections. Indeed, Trump’s flurry of tweets on the matter may suggest that the president eyes an electoral opportunity, as he reignites the Kavanaugh controversy to motivate his supporters.

Fox News was alight with the story throughout Monday, denouncing the liberal media and the perceived witch-hunt against Kavanaugh. Ultimately both Trump and Fox know that the re-emergence of the controversy will motivate both viewers and voters. Whether the new allegations contained in the book will lead to fresh inquiries into the supreme court justice seems less likely.