‘How to Murder Your Husband’ author charged with murdering husband 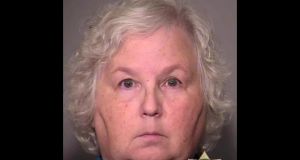 A US woman who wrote an essay entitled How to Murder Your Husband has been charged with murdering her husband.

Nancy Crampton-Brophy (68), a self-published writer from Oregon, US, was charged on Thursday September 6th with murdering her husband of 27 years, Dan Brophy.

Mr Brophy, a chef and instructor at the Oregon Culinary Institute, was discovered fatally shot on June 2nd in a kitchen at the school, according to an Oregon Live report.

Ms Crampton-Brophy, who was arrested on September 5th and booked into the Multnomah County Detention Centre, is the author of romance and mystery novels including The Wrong Husband - a story about a woman who escapes an abusive marriage during a shipwreck in the Mediterranean.

In a 700-word essay on the topic of killing a husband, published on November 4th, 2011, Ms Crampton-Brophy wrote: “Divorce is expensive, and do you really want to split your possessions?”

The essay was published on the website See Jane Publish. The post is no longer public, but archive versions have appeared online.

The essay listed possible methods for carrying out the murder, according to the report, including poisoning, hiring a hitman and using knives or a gun.

“I find it is easier to wish people dead than to actually kill them. I don’t want to worry about blood and brains splattered on my walls. And really, I’m not good at remembering lies,” she wrote.

“But the thing I know about murder is that every one of us have it in him/her when pushed far enough.”

A day after her husband’s body was discovered, Ms Crampton-Brophy wrote in a Facebook post: “For those of you who are close to me and feel this deserved a phone call, you are right, but I’m struggling to make sense of everything right now,” according to a CBS News report.

“While I appreciate all of your loving responses, I am overwhelmed. Please save phone calls for a few days until I can function.”

A motive for the alleged killing has not yet been revealed by police, according to reports.