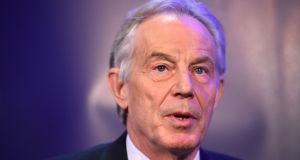 The European Union should make Britain an offer over Brexit to put an end to the ‘paralysis’ of the UK government, Tony Blair has said. Photograph: Kirsty O’Connor/PA Wire.

The European Union should make Britain an offer over Brexit to put an end to the “paralysis” of the UK government, Tony Blair has said.

The former Labour prime minister said Europe should step in when asked what the EU can do to help Britain break through its political impasse.

He told the Open Future Festival, organised by the Economist: “I think there is paralysis in the British Parliament, my view is they should make us an offer.”

Mr Blair said there was a “fundamental dilemma” which the past months of negotiations had never resolved, which was either stay close to Europe or break completely with the single market and customs union.

The latter, he warned, would be economically damaging.

The former Labour leader continued: “I personally think there is a paralysis in Parliament, the best response would be to go back to the people and say ‘look, we have had two-and-a-half years of this negotiation, we now know all the options, do you want to proceed or do you want to stay’”.

Britain is due to leave the EU in March next year, but no deal on how that will happen is in place after months of negotiations.

“I think the problem is when we look for people to blame, whether it’s business on the left or immigrants on the right, rather than understanding that this is a world of change and we need to master it.”

Mr Blair said the deal should address Britain’s concerns around freedom of movement and immigration, which are also an issue “all over Europe”.

The “underlying grievances” that led to Brexit could be dealt with without leaving the union, he said.

“And the thing that pains me is when you have a young working class person in north of England thinks they are more likely to get a job if we stop some Polish guy coming and working in a bar in London. It isn’t true.” - PA

Miriam Lord: Sinn Féin go arthouse for Everybody Can Have Everything manifesto