Storm Florence: Residents of Carolinas warned ‘worst yet to come’ 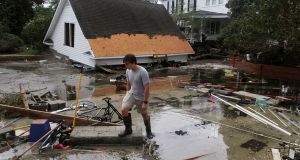 As Storm Florence kept dumping rain on North Carolina on Sunday, officials warned residents that “the worst is yet to come”. The storm has already killed at least eight people and is expected to cause further issues if inland rivers flood.

Florence, which crashed into the state as a hurricane on Friday, had weakened to a tropical depression by Sunday morning but was forecast to drop another 13cm to 25 cm of rain in North Carolina, bringing rainfall totals in some inland areas to 38cm to 50 cm, according to the National Hurricane Centre.

The most rain so far from Florence was 86cm in Swansboro, North Carolina, a new record for a single hurricane in the state. The previous record was 61 cm, set by Hurricane Floyd, which killed 56 people in 1999, said Bryce Link, a meteorologist with DTN Marine Weather, a private forecasting service.

In Fayetteville, a North Carolina city of about 210,000 people some 145km inland, authorities told thousands of residents near the Cape Fear River and Little River to get out of their homes by Sunday afternoon because of the flood risk.

“If you are refusing to leave during this mandatory evacuation, you need to do things like notify your legal next of kin because the loss of life is very, very possible,” Mayor Mitch Colvin said at a news conference on Saturday.

“The worst is yet to come,” he added.

A total of about 761,000 homes and businesses were without power on Sunday in North and South Carolina and surrounding states, down from a peak of nearly 1 million.

In New Bern, about 145km northeast of Wilmington at the confluence of two rivers, Florence overwhelmed the town of 30,000 and left the downtown area under water.

“It was pitch black and I was just scared out of my mind,” said Tracy Singleton, who with her family later fled her home near New Bern.

As authorities rescued people by boat and airlifted 50 stranded people in North Carolina, there were also reports of looting.

Five people were arrested for breaking into a Dollar General Store, said the police department in Wilmington, which has imposed a nighttime curfew.

A least seven people have died so far in the storm in North Carolina, including a mother and child killed by a falling tree and three people who drowned, state officials said. A woman died in South Carolina when her car hit a fallen tree.

“It has already dumped 20 to 30 inches of rain on parts of the Carolinas with more to come,” he said. “And many of the rivers will see prolonged flooding, some not cresting for a few days.”

Many roads were closed and authorities warned of landslides, tornadoes and flash floods, with dams and bridges in peril as rivers and creeks swelled.

The flooding could taint waterways with murky coal ash and toxic hog waste.

By Sunday morning the storm’s winds had dropped to about 35 miles per hour (55 km per hour), the National Hurricane Center in Miami said.

It had picked up pace somewhat, moving west at 8 mph (13 kph), and its center was expected to move across the western Carolinas during Sunday and the Ohio Valley and Northeast United States on Monday and Tuesday.

Trump, who plans to visit the region this week and he tweeted his “deepest sympathies and warmth” to the families and friends of those who died.

As the United States dealt with Florence, a super typhoon made landfall in China’s Guangdong on Sunday after barreling past Hong Kong and Macau and killing dozens of people in the Philippines. - Reuters