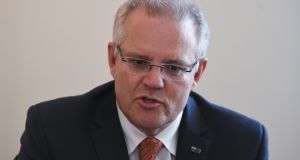 President Donald Trump has admitted he feels “amazingly alone” in the midst of all his scraps with allies and snarls with undermining advisers. But he can’t follow the usual advice for presidents suffering the vertigo of isolation: If you want a friend in politics, get a dog. As his first wife, Ivana, wrote in her recent memoir, “Donald was not a dog fan.” Indeed, it’s a favorite insult.

But there is someone – at the very bottom of the world in the land of Mad Max – who wants to play ball with the Mad King. In the Trump era, we can rewrite the maxim to be: If you want a friend in politics, get an Aussie.

“I think we both get it,” Australia’s new prime minister, Scott Morrison, cheerily told me in his office in Parliament House. Even though Australia did not get rocked by a recession like the US did, Morrison says some people feel forgotten, left off the globalism gravy train. “And that’s what we get. The president gets that. I get it.”

For those not familiar with the Canberra cascade of prime ministers – six in the last decade – the latest brutal leadership “spill” is best explained with a comparison to a famous sporting spill. In 2002, ice skater Steven Bradbury became the first Australian to win a Winter Olympic gold medal when his three top rivals crashed in a last-minute pileup. The right-wing Peter Dutton kicked off the coup that felled Malcolm Turnbull, but then the slimy Dutton and the soignée Julie Bishop crashed in a pileup that allowed the unprepossessing Morrison to glide across the finish line.

ScoMo, as the Antipodean prime minister is nicknamed, was not particularly well known but had clearly had his skates laced up for some time. He got off to a fast start, flying to Indonesia to negotiate a trade deal; visiting the outback to spotlight his focus on the drought (even though he absurdly told me about climate change that “I just don’t think it’s relevant to the discussion about how we’re helping farmers” and urged drought victims to “pray for that rain”); and vowing to pass a religious freedom Bill in determinedly secular Australia, where Pentecostals are commonly referred to as “happy clappers”.

“We don’t want all this political correct nonsense telling people they can’t have an Easter hat parade” or a Christmas play in a public school, Australia’s first Pentecostal prime minister told me. “In my maiden speech, I talked about the voices of faith being driven from the public square.”

I wonder if, like Karen Pence, the devout Morrison was bothered by Trump’s flouting of the Commandments. (Thou Shalt Not Covet All the Playmates and Porn Stars at a Lake Tahoe Golf Tournament.) “Well,” he demurred, “I just take people as I know them.’’ It’s apparent that he doesn’t know Trump yet, describing him as “very practical” and someone “who’s not going to waste a day”. “I like that about him,” enthused Morrison, who is obviously ready to do the Aussie equivalent of the Saudi sword dance. “I like that about him a lot, actually.” Trump may be “president non grata” nearly everywhere else, as the Washington Post’s Ashley Parker has written. But Australia’s Liberal (read Republican) government prides itself on what one top official refers to as their “deft and nonjudgmental” handling of the president.

Last year, to move past their fractious phone exchange over who would take the refugees marooned off Australia’s coast, Turnbull met with Trump on the Intrepid in New York. The Australians showed the ahistorical president a video to stress that they had fought alongside America in every major war for the last 100 years. (This may have given Trump the idea to show Kim Jong Un an inspirational video.) And they trotted out Rupert Murdoch and Greg Norman.

The president called the new prime minister the day after he took office. “I told the president I was a rubbish golfer,” Morrison said, with a wide smile, describing the 12-minute call. “I’m not sure if that phrase is well known and I think he thought I meant I was a good golfer because he started going ‘Oh, what’s your handicap?’ And I said ‘No, no, no, it means I’m not very good at it.’ He’s passionate about it. He knows all the Australian players.”

The 50-year-old father of two is the son of a police officer, not a scion of wealth. But the two share similarities: both expediently lurched to the right on social issues. Both throw red meat to the base. Both craft their political identities with dog whistles around the issue of protecting their countries from hordes of migrants.

Before now, Morrison was best known for his campaign as immigration minister to “Stop the Boats”, turning back vessels of migrants trying to reach the shores of Fortress Australia. His office features a model migrant boat bearing the proud declaration “I Stopped These”, and a cabinet adorned with a Jesus shrine and a biblical proverb to “Trust in the Lord”. Morrison, who did not condemn Trump’s infamous travel ban, is never able to convincingly explain how he reconciles his Christian values and the role he plays in dooming children to offshore detention centers.

Morrison said he is also excited to deepen his relationship with fellow evangelical Mike Pence, who was dispatched for cleanup duty after Trump shredded one of our closest relationships. Pence and Morrison were not in favor of same-sex marriage. When a popular Australian rugby player stated his belief on Instagram last spring that gays who don’t “repent of their sins and turn to God” are going to hell, Morrison chimed in, saying: “Good for him for standing up for his faith.”

We were meeting as Washington was in full Munch Scream mode after the double blow of Bob Woodward’s book and the New York Times’ anonymous op-ed piece, both depicting the president as a danger to America. Woodward’s book revealed that Trump had planned to lie to Turnbull about steel tariffs.

So does all this volatility and immorality make Morrison nervous? “We look through the dust,” he replied, breezily.