Maduro holds on to power despite domestic and global pressure

Rallies support incumbent and rival Guaidó, as Venezuela’s army backing may be on wane 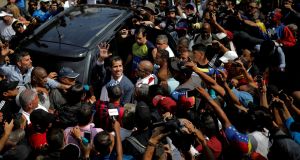 Rival presidents led rival mass rallies in Venezuela this weekend as the country’s political stand-off intensified with embattled President Nicolás Maduro backing a plan to move against the last bastion of the opposition after its leader, Juan Guaidó, declared himself interim president on January 23rd.

Speaking at a rally to commemorate 20 years in power for his populist Chavismo movement, Maduro once again ruled out stepping aside and holding new presidential elections as demanded by most countries in the Americas and the European Union.

But he backed a proposal by his own United Socialist Party of Venezuela to bring forward to this year elections for the national assembly, the country’s only institution controlled by the opposition.

“They want to bring forward elections? Let’s have elections!” said a defiant Maduro, whose government has been widely denounced for blatant poll-rigging in recent years.

Meanwhile at a rival rally in Caracas, Guaidó renewed his calls for the military to abandon the regime on the same day that an air force general became the most senior serving officer to recognise him as president. In a video posted on Saturday on social media, Francisco Yánez said a democratic transition was imminent. “People of Venezuela, 90 per cent of the armed forces are not with the dictator,” he added.

Venezuela’s high command has declared its loyalty to Maduro but there are increasing signs of splits within the military, with the regime believed to be ever more reliant on a spy network run by Cuban intelligence officers to identify and neuter attempted insurrections against the regime by lower-ranking officers.

Guaidó called on supporters to keep up the pressure on Maduro to quit what he classified as his “usurpation” of the presidency by holding more rallies this month. He also announced humanitarian aid from the United States would soon be arriving via Colombia, Brazil and an unnamed Caribbean island and called on soldiers manning the frontier to let it enter the country. Maduro denounced the aid operation as a pretext for a military intervention by the US.

The mass protests mounted by the opposition are being driven in part by public fury at the regime’s disastrous stewardship of the economy, which the UN estimates has shrunk 44 per cent since 2013, an unprecedented collapse for a South American country. The International Monetary Fund estimated inflation last year of one million per cent and warned this year it could top 10 million per cent.

Plunging oil production has left Maduro without the funds to import sufficient amounts of food and medicines, leading to widespread hunger. Three million people have fled abroad in recent years, leaving neighbouring states worried that any deepening of the crisis could provoke an even bigger exodus.

Guaidó has said he will also now seek humanitarian aid from the European Union. A deadline set by seven EU countries for Maduro to call new presidential elections was set to expire at midnight on Sunday night. France, Germany, Spain, Portugal, the UK, the Netherlands and Belgium have said they will join most of the states in the Americas in recognising Guaidó as president if Maduro fails to cede to their demand.

Federica Mogherini, the EU’s high representative for foreign affairs, is expected to co-chair with Uruguay the first meeting of the recently formed International Contact Group on Venezuela, to be held in Montevideo this Thursday. The diplomatic initiative headed up by Uruguay and Mexico has as its goal the “the holding of new elections with all guarantees for a free and fair electoral process, supervised by international independent observers”.