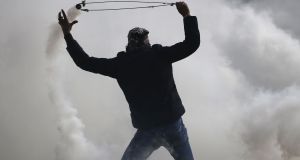 A Palestinian protester uses a slingshot to throw back a tear gas canister at Israeli troops during clashes in al-Mughayyir village near Ramallah, in the Israeli-occupied West Bank on Sunday. Photograph: Abbas Momani/AFP/Getty Images

Israel’s parliament has cancelled a trip to Ireland scheduled for March by a delegation of legislators in protest against the Bill boycotting goods manufactured in the West Bank which was passed by the Dáil last week.

The Israeli government has also threatened retaliation on Ireland, including imposing tariffs on Irish goods that are sold in Israel, if the Bill becomes law.

The Knesset delegation was due to meet Ceann Comhairle of the Dáil and members of the Oireachtas foreign affairs and defence committees on its planned visit in March.

Separate to this cancellation, Israel’s economy and industry minister Eli Cohen has threatened to review the import of Irish goods and bilateral trade agreements if the Bill is advanced.

The Yisrael Hayom newspaper, considered close to prime minister Binyamin Netanyahu, reports that ministry officials have been instructed by Cohen to draw up contingency plans for what was termed severe economic-political measures against Ireland, including a tax on Irish imports, suspending bilateral economic and commercial agreements and suspending other cooperative efforts with Dublin.

Mr Cohen said Israel would come up with an appropriate response.

“The boycott attempts by the sponsors of the bill in Ireland are despicable, pathetic and hypocritical. We will act to prevent by all means the final approval of the Bill. If the anti-Semitic voices prevail in the Irish parliament and this despicable bill is passed into legislation, we will take retaliatory measures,” he said.

“We will definitely consider our measures against the goods from Ireland and bilateral trade agreements. The days in which they boycotted Israel without a response have come and gone. Israel enjoys economic strength and technological innovation and is an international brand.”

Mr Cohen, a member of the centrist Kulanu party, recalled how he responded to BDS (Boycott, Divestment, Sanctions) activists in Canada.

“I told them, ‘If you want to come and boycott Israel, then go all the way.’” They asked me in astonishment what I meant: “When you wake up in the morning, you will eat your salad with regular tomatoes and not cherry tomatoes because they were developed in Israel.

Mr Cohen said that he hoped Ireland would “return to its senses” and that the Bill will be stopped before it can go into effect.

“The Irish economy minister, in my understanding, opposes this proposal and we will try to use this to thwart it completely.”

Following last week’s passing of the first reading of the Bill in the Dáil, Irish ambassador to Israel Allison Kelly was summoned to the foreign ministry in Jerusalem and was given an “angry rebuke” over what Israeli officials described as the “scandalous” Bill.

Mustafa Barghouti, the secretary-general of the Palestinian National Initiative party, said the measure was a “great victory for the BDS movement”.

“We will seek to pass similar laws in a number of European countries in the near future,” he said.

Ministers have told both the Dáil and Seanad that the Bill was not compatible with EU law and that the Government did not intend to implement the boycott.