Six people died every day crossing the Mediterranean in 2018 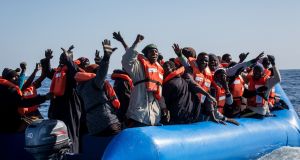 The number of refugees and migrants arriving in Europe from the Mediterranean was the lowest in five years in 2018. Photograph: Federico Scoppa/AFP/Getty Images

An average of six people died each day trying to cross the Mediterranean in 2018, according to new figures released by the UN refugee agency, the UNHCR.

Cuts in search-and-rescue operations were one of the reasons the Mediterranean remained the deadliest sea crossing in the world, the agency said.

The estimated 2,275 people who died or went missing last year equates to one death for every 14 arrivals in Italy.

“Saving lives at sea is not a choice, nor a matter of politics, but an age-old obligation,” said Filippo Grandi, UN high commissioner for refugees. “We can put an end to these tragedies by having the courage and vision to look beyond the next boat, and adopt a long-term approach based on regional co-operation, that places human life and dignity at its core.”

The number of refugees and migrants arriving in Europe from the Mediterranean was the lowest in five years, at 139,300. This is largely because of a two-year-old deal between Italy and Libya, which has seen the EU pay tens of millions of euro to the Libyan coastguard to conduct rescues and interceptions. The Libyan coastguard says it intercepted 15,000 refugees and migrants in 2018.

Most are put in detention centres run by Libya’s Department for Combatting Illegal Migration. In a report released last week, advocacy organisation Human Rights Watch described the conditions in them as “nightmarish”.

The risk of being turned back means some refugees and migrants will try to cross the Mediterranean multiple times. One Somali refugee told The Irish Times he has tried six times in the past 18 months.

The UNHCR’s report shows that – with reduced chances of success making the crossing from Libya – more refugees and migrants are turning to other routes to reach Europe. About 54,800 crossed over the western Mediterranean towards Spain, while 8,000 people arrived in Spain by land. Nearly three times more people than in 2017 reached Greece through its land border with Turkey, while 32,5000 arrived there by sea.

Recent months have also seen migrants and refugees saved by rescue ships left stranded for weeks at sea. Ireland has now received 63 people from boats rescued in the Mediterranean, said UNHCR spokesman in Ireland Jody Clarke. “Other EU member states have welcomed people under the same arrangements, but the ad hoc approach cannot continue,” he said.

For friends and family of those trying to make it to Europe, the only way they will know their loved one has died may be a break in contact. “Once you don’t hear [the person is in Libyan] detention or Europe. Then you will put them on a death list,” said a Somali refugee in Tripoli, who said he was planning to attempt the crossing soon. “Not an actual list, but I mean you will forget him. Just we remove them from our mind because if we try to remember we will be sad.”

At least 207 people have died in the Mediterranean in 2019, according to the International Organisation for Migration.

Yet refugees and migrants in Libya say the number of people attempting to cross will increase again from February, as the sea becomes more calm. “Refugees don’t care if it’s blocked or open, they will try again,” said one 24-year-old from Sudan. He said there were no other real solutions to finding a safe country, given how few spaces there were for refugees to be legally evacuated. The UNHCR says it’s aiming to evacuate 2,500 from Libya in 2019.

For refugees in Libya, many of whom have escaped wars or brutal dictatorships, the mounting deaths are just more evidence of what they see as the world’s indifference. “Tell the world we are humans, not animals,” one Eritrean said.