May to seek backstop replacement to avoid hard border 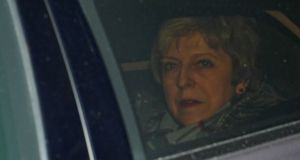 Theresa May has told Conservative MPs that she will seek to replace the Northern Ireland backstop with alternative arrangements to prevent a hard border.

The prime minister urged them to vote on Tuesday for an amendment calling for her Brexit deal to be approved on condition that the backstop is replaced.

But on Monday night hardline Conservative Brexiteers rejected Mrs May’s call, saying that the amendment proposed by 1922 Committee chairman Graham Brady did not go far enough. Jacob Rees-Mogg said they were opposed to anything short of a promise to renegotiate the text of the legally binding withdrawal agreement Mrs May agreed with other European Union leaders last November.

“The amendment gives conditional approval, which is an issue. It does not say what the backstop would be replaced with and Graham has said he could live with a protocol rather than changes to the text. From our point of view it has to be changes to the text,” Mr Rees-Mogg said.

MPs will on Tuesday vote on a series of amendments on how the prime minister should proceed with Brexit following their overwhelming rejection of her Brexit deal this month. The EU’s deputy chief negotiator Sabine Weyand said on Monday that the withdrawal agreement would not be reopened and warned that Britain could be heading towards a no-deal Brexit by accident.

Ms Weyand was sceptical about the amendment the prime minister is backing and about “alternative arrangements” to the backstop.

“We are open to alternative arrangements. The problem with the Brady amendment is that it does not spell out what they are. It’s not a criticism of them because they don’t exist,” she said.

She said negotiations between Britain and the EU were over and that Mrs May now needed to assemble a stable majority to ensure that the Brexit deal and all its implementation legislation would pass.

Mrs May told MPs that they would be able to vote on another Brexit motion in the middle of February, so that Tuesday night’s vote would not be their last opportunity to tell the government how to proceed. This was viewed as an attempt to dissuade moderate Conservatives from supporting an amendment that could instruct the government to seek an extension to the article 50 negotiating deadline.

Meanwhile in Dublin, the Cabinet will discuss further preparations for a no-deal Brexit this morning when Minister for Finance Paschal Donohoe is expected to present a memo on its implications.

Mr Donohoe and Taoiseach Leo Varadkar have ruled out an emergency budget in the event of a no-deal outcome, insisting that the October budget was drawn up with Brexit in mind. But the Central Bank warned last week that a no-deal Brexit would deliver a serious blow to the Irish economy, slashing projected economic growth this year. Sources said that they expected the Finance memos to be similar to the Central Bank expectations.