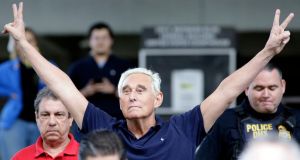 Roger Stone, on leaving the courthouse in Fort Lauderdale, Florida, gestures as Nixon once did. AP Photo/Lynne Sladky

Roger Stone, a long-time associate of US president Donald Trump, was charged with obstruction and witness tampering on Friday, becoming the latest figure to be indicted by special counsel, Robert Mueller.

Mr Stone was arrested by the FBI shortly before daybreak on Friday at his home in Fort Lauderdale, Florida.

He later appeared at a federal court where he was released on bail on a $250,000 bond.

Speaking outside the court, Mr Stone protested his innocence: “I will plead not guilty to these charges. I will defeat them in court,” he said to the assembled crowd.

Some shouted “Lock him up”, a reference to Mr Stone’s taunting of Hillary Clinton during the 2016 presidential campaign.

The 66-year-old political operative said there was no evidence of collusion with Russia, adding: “I am a fervent supporter of the president. I think he is doing a great job of making America great again... There’s no circumstance under which I would bear false witness to the president.”

He made a double “v” sign as he addressed the crowd, a symbol that appeared to recall Richard Nixon’s famous gesture as he left the White House for the last time after his resignation in 1974.

Mr Stone worked for Nixon’s campaign in the early days of his career and famously has a tattoo of the former president on his back.

Mr Stone was charged with seven counts, according to the indictment: one count of obstructing an official proceeding, one count of witness tampering and five counts of false statements.

The court documents shed light on a key issue that has dogged Mr Stone in recent months – what he knew about the hacking of the Democratic National Committee (DNC) server by Russian intelligence in 2016, which led to the release of documents by Wikileaks.

Greatest Witch Hunt in the History of our Country! NO COLLUSION! Border Coyotes, Drug Dealers and Human Traffickers are treated better. Who alerted CNN to be there?

The email hack, which contained damaging information about Mrs Clinton, played a central role in the final months of the 2016 presidential campaign.

The documents state that Mr Stone told “senior Trump campaign officials” about the emails between June and July of 2016.

After the first batch of emails were released by Wikileaks on July 22nd, it is claimed that a senior campaign official was directed to ask Mr Stone to find out information about possible further damaging information about Mrs Clinton that might be forthcoming.

The documents show that these interactions continued into the autumn, revealing email exchanges between Mr Stone and former Trump aide Steven Bannon, as well as with Donald Trump jnr in October, just before 6,000 emails relating to Clinton campaign chairman John Podesta were released.

Prior to the 2016 election, Mr Stone suggested several times in public comments that he had advance knowledge of the email leak.

In a tweet in October 2016, he seemed to suggest that he knew that the Podesta leak was imminent.

“I have total confidence that @wikileaks and my hero Julian Assange will educate the American people soon. #LockHerUp” he tweeted.

The emails were released later that week.

Mr Stone’s indictment provides the strongest link yet between the Trump campaign and Wikileaks’ efforts to disrupt the Clinton campaign.

A colourful figure who has been well known in the US political scene since his work for the Nixon administration in the 1970s, Mr Stone’s friendship with Mr Trump stretches back decades.

He worked as a formal adviser to Mr Trump in 2015, continuing to advise him in a more informal capacity during the presidential campaign.

He is the 33rd person to be indicted in relation to the special counsel investigation into Russian interference in the 2016 presidential election, and the sixth Trump associate to be charged.

Jay Sekulow, a lawyer for Mr Trump, said the indictment showed no evidence of collusion. “The indictment today does not allege Russian collusion by Roger Stone or anyone else. Rather, the indictment focuses on alleged false statements made to Congress.”

White House press secretary Sarah Huckabee Sanders sought to broadly distance Mr Trump from the charges. “The charges brought against Mr Stone have nothing to do with the president,” she said.

In a morning tweet, Mr Trump appeared to lash out at the investigation, questioning how CNN, which aired footage of the FBI raid on Mr Stone’s home, had known in advance of the arrest.

“Greatest Witch Hunt in the History of our Country! NO COLLUSION! Border Coyotes, Drug Dealers and Human Traffickers are treated better. Who alerted CNN to be there?”

However, CNN said that, through research, it deduced that Mr Stone’s arrest could be forthcoming and, as a result, the network sent a camera crew to his home on Thursday.

1 Coronavirus in pubs: Meeting details reveal NPHET’s view on alcohol and spread of Covid-19
2 Trump refuses to commit to peaceful transfer of power if he loses election
3 Swedish expert backtracks on herd immunity for Ireland
4 'The next 10 days are critical' - NPHET warns young people are ending up in ICU
5 Clampers used unauthorised ‘spotter workaround’ for higher bonuses
Real news has value SUBSCRIBE