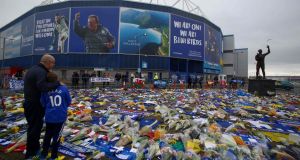 A new search for missing Cardiff striker Emiliano Sala has been launched after €300,000 was raised to fund the operation.

An official search and rescue operation for the Piper PA-46 Malibu carrying the Argentinian striker and pilot David Ibbotson, which disappeared last Monday, was called off on Thursday.

Pleas for the search to resume were made by the 28-year-old player’s family, as well as by Argentinian soccer stars Lionel Messi, Diego Maradona and Sergio Aguero, and Argentina’s president Mauricio Macri.

Donations from soccer players including Manchester City’s Ilkay Gundogan have helped a GoFundMe page raising money for a new search to reach a revised target of €300,000.

A statement on the GoFundMe page read: “The call for funds launched late Friday afternoon allowed the relatives of Emiliano Sala, via a specialised organisation, to resume research in the [English] Channel early Saturday morning. Two boats conduct the operations.”

Soccer agent Willie McKay arranged for the flight to take Sala from Nantes to Cardiff, but had no involvement in selecting the plane or pilot.

McKay’s son, Mark, was the acting agent for Nantes in a move which made Sala a club-record transfer for Cardiff.

After signing for Cardiff for €17 million, Sala returned to Nantes to collect his belongings and say goodbye to team-mates and staff of the Ligue 1 club before heading back to the UK. However, the plane carrying Sala back from Nantes disappeared over the Channel on Monday evening.

Cardiff’s staff and supporters will wear yellow daffodils at Arsenal on Tuesday to honour Sala, and the club captains will place floral tributes at the ground.

On Saturday, tributes were paid to the missing men before a number of games, including the FA Cup match between Swansea and Gillingham at the Liberty Stadium. – PA

1 Trump postpones election rally as Covid-19 cases surge
2 Johnny Depp: Ex-wife or friend defecated in bed in ‘fitting end’ to marriage, court hears
3 Reopening of pubs that do not serve food may be delayed beyond July 20th
4 Brightest comet of the century visible in Irish skies for the next week
5 Coronavirus: One death, 25 new cases reported in State
Real news has value SUBSCRIBE