Some 123 activists have been killed since 2009 coup d’état 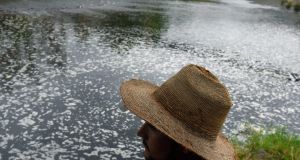 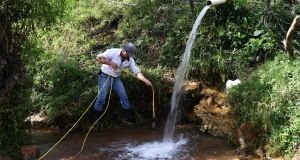 Victor Sandoval of the University of San Carlos of Guatemala collects water samples for analysis near the Lempa river source in Olopa, east of Guatemala city. Photograph: Marvin Recinos/AFP/Getty Images

Honduras is the deadliest country on Earth to be a defender of environmental rights with conflict over mining, hydropower and agribusiness leading to the deaths of many people from indigenous groups and rural communities, the Global Witness charity has said.

Some 123 land and environmental defenders have been killed in Honduras since the nation’s 2009 coup d’état, according to research from Global Witness released last week. Meanwhile, countless activists and their families continue to face threats, intimidation, physical attacks and trumped-up legal charges as well as damage to their land and property.

Global Witness campaign leader Billy Kyte said the charity’s investigations found that Honduran political and business elites were “using corrupt and criminal means to cash in on the country’s natural wealth” and “enlisting the support of state forces to murder and terrorise the communities who dare to stand in their way”.

The NGO has documented many incidences of attacks and threats including the “beating by soldiers of pregnant women, children held at gunpoint by police and arson attacks on villagers’ homes”. It warns in the report that these crimes are being met with “chronic levels of impunity”. Three of the people interviewed during the research phase of its report have since been murdered.

The group says the human rights of Honduras’s 1.27 million-strong indigenous population have been sacrificed in the name of development and blames the widespread corruption in politics for the high levels of impunity among those responsible for these human rights abuses.

“The Honduran government has completely failed to put in place adequate protection policies and prosecute the perpetrators of violence, some of whom are state actors,” it writes.

The report also accuses the international community of being complicit in these human rights abuses, citing the large amount of foreign aid the Honduran government receives from overseas, particularly from the United States. It adds that the US embassy in Tegucigalpa has been promoting “ramped-up investment in Honduras’ extractive industries”.

“As Honduras’s biggest aid donor, the US should help bring an end to the bloody crackdown on Honduras’ rural population,” said Mr Kyte. “Instead it is bankrolling Honduran state forces, which are behind some of the worst attacks. The incoming US administration must urgently address this paradox, which is fuelling, not reducing, insecurity across the country.”

The charity is also calling on Honduran president Juan Orlando Hernández and other prominent public officials to make strong public statements recognising the legitimate role of land and environmental defenders and a commitment to guarantee their protection.

Ana Mirian Romero, who was awarded the 2016 Front Line Defenders award for her efforts to defend her community’s land in Honduras, told an Irish audience last year that her aim was to ensure the land, air and water in her community was not contaminated by hydroelectric dams.

“That is all we want – land, air and water that is not contaminated by the dams,” said Ms Romero. “We are persecuted and threatened for this, but we do it for our children’s future.”