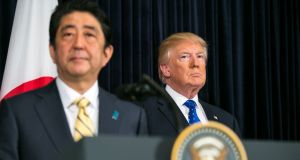 Shinzo Abe with Donald Trump: The Japanse prime minister has offered to resign if his involvement in the school controversy is confirmed. Photograph: Al Drago/The New York Times

Lingering suspicions about far-right ties to Japan’s government have surfaced again in a row about an alleged sweetheart deal for the operator of an ultra-nationalist kindergarten.

Under fire in parliament, prime minister Shinzo Abe, one of Japan’s longest-serving leaders, said he would step down if his involvement in the deal is substantiated.

The private kindergarten in Osaka has its 3-5-year-old students memorise a 19th-century edict that was used to indoctrinate youngsters during the second World War. Children at the school chant patriotic slogans in front of pictures of the emperor, including: “Should emergencies arise, offer yourselves courageously to the state.”

Opposition politicians have singled out the sale of a plot of land last year to Moritomo Gakuen by the government in Osaka Prefecture at a fraction of the appraised price.

A primary school is being built on the 8,770sq m plot. Mr Abe’s wife, Akie, will be its honorary principal when it opens in April. The prime minister’s name was used to solicit donations.

Yasunori Kagoike, the president of the kindergarten, has denied that the 134 million yen (€1.1 million) paid for the plot last June, far below its list price of 956 million yen, was too cheap.

The school says the cost of cleaning up arsenic and other contamination found on the site explains the whopping discount. “We have done things open and above board,” Mr Kagoike said this week.

The controversy has thrown a spotlight on Nippon Kaigi, or Japan Charter, a nationalist lobby group with close ties to the government. Mr Kagoike leads a local chapter of the group.

About a third of the Diet (parliament) and more than half of Mr Abe’s 19-member cabinet support Nippon Kaigi. Mr Abe is a specialist adviser to its parliamentary league.

Like followers of US president Donald Trump, members of Nippon Kaigi want to “take back” their country from the liberal forces that they believe are destroying it. The group’s goals include building up the nation’s military forces, instilling patriotism in the young, and revising much of the pre-war Meiji constitution.

Critics say its charter is a shopping list of blatantly revisionist causes: applaud Japan’s wartime “liberation” of east Asia from western colonialism; rebuild the armed forces; inculcate patriotism among students brainwashed by left-wing teachers; and revere the emperor as he was worshipped before the war.

Mr Abe has denied that he or his wife were involved in the land sale or that he gave permission for his name to be used, though both have praised the curriculum offered by the kindergarten.

Responding to questions from opposition politicians last Friday, Mr Abe said he did not know that donations were being solicited for a “Prime Minister Shinzo Abe” memorial elementary school.

“This is the first I’ve heard of it,” he said, adding that he would “quit as prime minister and as a Diet member” if found to have been involved in the scandal.