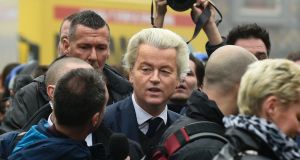 Dutch anti-Islam politician Geert Wilders, who is leading polls ahead of next month’s election, said on Wednesday he had cancelled all public campaign events after an agent involved in his security team was suspended.

The secret service said on Tuesday that an agent of a Moroccan background had been suspended on suspicion of leaking details to a criminal organisation.

On Wednesday, newspaper Algemeen Dagblad reported that the man’s brother, also a police officer, had leaked information about murder inquiries and had been accused of rape and been dismissed. Police were not immediately available for comment.

There is no suggestion the cases had anything to do with Wilders or his team.

Secret service chief Erik Akerboom said on Tuesday that neither Wilders nor any of the other people the team protects, including the Dutch royal family, had ever been in danger as a result of the leaks.

Wilders, who promises to close mosques and crack down on “Moroccan scum”, said he would await the conclusions of the investigation into the corruption allegations before appearing in public again.

“My god, I had no idea,” tweeted Wilders, who has been living under 24-hour protection since the 2004 murder by an Islamist militant of film-maker and Islam-critic Theo van Gogh. “How much more is there I don’t know.”

The protection officer had been responsible for scouting out locations that protected politicians were due to visit. The officer was granted provisional release pending trial.

Wilders’ party leads in opinion polls for the March 15th vote with 17 per cent, a whisker ahead of the pro-business Liberals of the prime minister, Mark Rutte, who has closed the gap by matching some of Wilders’ anti-immigration rhetoric and received a boost from a surging economy.

Wilders rarely appears in public, but makes occasional exceptions for campaigning events, such as touring a farmers’ market near Rotterdam on Saturday.

His campaign details are available on his website and he had been scheduled to appear on Saturday in the fishing village of Volendam, a stronghold of his Party For Freedom.