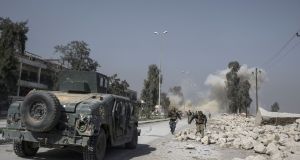 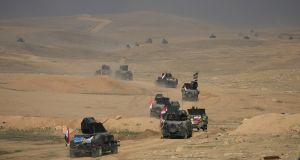 Battlefield defeats in Iraq and Syria continued to splinter the so-called Islamic State’s hold on both countries on Thursday, with Mosul airport seized by advancing Iraqi forces and the town of al-Bab finally falling to Syrian rebels.

Backed heavily by Turkey, rebels said they had recaptured nearly all of al-Bab, which had remained Isis’s westernmost stronghold throughout five months of intensive fighting and a key target of the war against the terror group.

The seizure of al-Bab came as the airfield on the western outskirts of Iraq’s second city fell to Iraqi troops after a brief, but intense, battle. Its capture allows advancing government forces to consolidate a stronghold close to Mosul before launching an all-out push to retake it – a move that would strip Isis of its last urban stronghold in Iraq.

By nightfall, troops were moving into the sprawling airfield to launch operations into the fortified western suburbs, where several thousand of Isis’s most seasoned fighters have prepared for a last stand.

If the west of the city falls, the extremists’ presence in Iraq will be confined to a border area in the country’s northwest, which spills towards its last remaining centre of gravity, the Syrian city of Raqqa.

Backed by US jets and drones, national police forces were first into the Mosul airfield and had secured most of the runway by noon local time. Militants had laid mines throughout the disused complex and were clashing heavily with advancing forces, before capitulating late in the afternoon.

A spokesman for the Iraqi counter-terrorism forces, Sabah al-Numan, said: “Our forces started a major operation this morning to storm the Ghazlani airport base and I can confirm that it is only a matter of time before we control the whole area.”

The seizure of the base will give the forces and their US backers control of two large airfields near Mosul, the other one being the Qayyarah military base, to the south of the city.

In al-Bab, a Syrian rebel spokesman said mines had been laid “every square metre” throughout the centre of the city, which had been home to Isis’s external operations arm – that part of the organisation responsible for plotting a series of spectacular terror attacks in Europe.

Rebels advanced cautiously through central neighbourhoods as Isis members retreated to the west, where a series of towns and villages spreading towards Raqqa offer one of its last redoubts in Syria.

Outnumbered and outgunned in Syria and Iraq, Isis is expected to intensify the guerrilla campaigns that became its signature acts in both countries over the past 2½ years, in which it ran rampant over a large swath of the region.

Mines, barricades, trenches and tunnels were littered throughout eastern Mosul, making heavy going for Iraqi forces, which eventually retook the area earlier this year after a three-month battle.

However, the west of the city is a more difficult landscape to take militarily. West Mosul’s narrow streets will make the going tough for armoured vehicles, meaning a lot of the fighting will need to be done house to house.

Isis is known to have deployed dozens of suicide bombers along approaches.

A British jihadi, Jamal al-Harith, born Ronald Fiddler, is thought to have been among them and to have blown himself up in an area known as Abu Saif on Monday.

Aid organisations say as many as 750,000 civilians may still be in western Mosul. Mercy Corps’s country director, Su’ad Jarbawi, said: “We need to be nimble and ready to respond to the needs of the people wherever and however we find them.

“In the battle for the eastern half of the city of Mosul we saw the overwhelming majority of civilians staying in their homes rather than fleeing. This was a marked departure from what we’ve seen in previous battles. However, we don’t yet know what civilians in the western side of the city will choose to do.”

As many as half of Mosul’s remaining residents are thought to be under 18, and 160,000 have already fled the west of the city for newly erected refugee camps to the south. Iraqi forces have detained hundreds of military-aged men as they have fled, in an attempt to weed out any Isis members among them.

Iraq’s prime minister Haider al-Abadi has demanded that troops be held accountable for any abuses. In the fight for the east of the city, relatively few allegations of abuse arose, with national police and soldiers winning the cautious trust of communities who, before the Isis takeover of Mosul in mid-2014, had been deeply wary of a security order imposed by Baghdad.