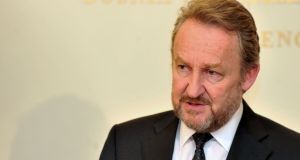 Bakir Izetbegovic: The Muslim Bosniak member of Bosnia and Herzegovina’s tripartite presidency wants the International Court of Justice to review its 2007 ruling that cleared Serbia of genocide during the country’s civil war. Photograph: ELVIS Barukcic/AFP/Getty Images

The European Union’s foreign policy chief, Federica Mogherini, will visit the Balkans next week to emphasise the need for reform and good relations across the region amid a series of rumbling crises.

The latest issue to roil former Yugoslavia is Serb fury over plans by a Bosnian Muslim leader to revive allegations that the Serbian state played an active role in genocide committed during the 1992-1995 Bosnian war.

Bakir Izetbegovic, the Muslim member of Bosnia’s tripartite presidency, said the country would appeal against a 2007 ruling by the International Court of Justice. The court found insufficient evidence that Belgrade had directed or controlled the Bosnian Serb militia that murdered some 8,000 Bosnian Muslims at Srebrenica in July 1995.

The Bosnian Muslim (or Bosniak) leader said new evidence had come to light from the trial of wartime Bosnian Serb general Ratko Mladic, and an appeal must be lodged before a court deadline this month.

Mr Izetbegovic’s Serb and Croat colleagues in the Bosnian presidency have not agreed to the legal challenge. Leaders of the Bosnian Serb region and Serbia proper warn that it could have grave consequences for ethnic and regional relations.

“Our relations have been pushed backward 25 or 22 years. The little trust we built over the years . . . is now gone,” said Serbian prime minister Aleksandar Vucic.

Serbian foreign minister Ivica Dacic warned the court case “could cause destabilisation of not only Bosnia but the entire region”.

Bosnian Serb leader Milorad Dodik, who often threatens to seek his region’s secession from Bosnia, called the appeal “an act of hatred” from Bosniaks towards Serbs that “closed the door for Bosnia and its future and turned off the lights”.

The spat comes just as Serbia and Kosovo soothe a dispute that brought them to “the brink of conflict” last month, according to Serbian president Tomislav Nikolic.

Elsewhere in the former Yugoslavia, Macedonia remains without a government more than two months after a contentious election that was intended to end a two-year political crisis caused by a major spying and corruption scandal.

In neighbouring Albania, opposition deputies boycotted parliament on Thursday amid street protests by their supporters, who want a politically neutral government to prepare for national elections in June.

The boycott looks set to delay legal reforms the European Union says are essential for membership talks to begin.

Ms Mogherini said she wanted to see “every single one of the western Balkans partners move forward on the reform path . . . Regional co-operation and good neighbourly relations remain essential in this context.”