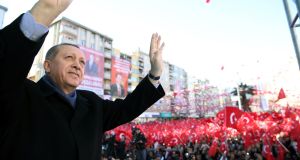 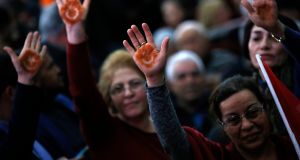 Opponents of proposed changes to Turkey’s constitution that would give more powers to the president at a rally in Ankara on February 18th. Photograph: Tumay Berkin/EPA 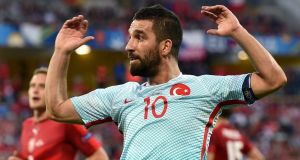 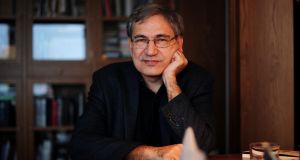 Orhan Pamuk: The Turkish Nobel laureate author claims a centrist newspaper scrapped an interview with him because he support the No side. Photograph: Ozan Kose/AFP/Getty Images

Turkish celebrities enjoy the same level of obsession and scrutiny as in most other countries, but now many are wading into politics ahead of a deeply divisive referendum that may mark the beginning of a controversial new chapter for the country.

On April 16th, Turks will vote on proposed changes to the constitution that would see political power concentrated in the hands of Recep Tayyip Erdogan.

The president launched his contribution to the campaign a full 10 weeks before the referendum, a campaign that is expected to see him canvass in 40 cities.

The changes Erdogan seeks would lead to the scrapping of the prime minister’s office, make him an executive president, and allow him to serve two more terms after his current one ends in 2019.

Figures from nonpolitical backgrounds, including some of the country’s best-known names, have been drawn into what has quickly evolved into a fiercely fought battle pitting secularists against the government and its supporters.

“I am a Turk, I am a Kemalist, I am secular. I support democracy and I am against terrorism. I support a free Turkey. For this we say No,” Oku recorded in a January 27th video posted to his Instagram account, which has been viewed more than 160,000 times.

A host of actors and authors, including Ece Temelkuran, one of Turkey’s most-read columnists and an outspoken critic of the government, are also urging Turks to reject the proposed changes.

So have 11 political parties, including nine not represented in parliament.

Turkey’s parliamentary system of governance was established from the ashes of the world’s last Islamic caliphate, the Ottoman Empire, almost a century ago by state founder Mustafa Kemal Ataturk.

His vision for Turkey was modelled on progressive European and western states, and he saw a government checked by a parliament of representatives elected by the people as a fundamental aspiration of what the country should be.

Critics of today’s AK Party-led government fear Erdogan wants to reshape Turkey in his own likeness, a path some believe could close an important part of the country’s history.

According to Erdogan, Turks signalled their desire for a presidential system in 2007 when they voted more than 2-1 for the president to be directly elected. Previously, the president had been chosen by parliament.

The government argues that the proposed referendum changes, which would see the president take over as head of cabinet and leader of the ruling AK Party, will make for a more efficient executive branch – as well as making Turkey, wracked by bombings and political instability for more than two years, safer.

Under the provisions of the current constitution, Erdogan is prohibited from involvement in the day-to-day running of the country.

The Yes campaign is backed by several nonparliamentary parties in addition to the right-wing MHP (Nationalist Movement Party), the AK Party’s most visible political partner and the fourth-largest party in parliament.

The government can rely on superstar headline names. Barcelona midfielder Arda Turan, already a divisive figure among football fans, has thrown his support behind the Yes vote, as have other revered footballers and coaches.

Born and raised in a district of Istanbul that voted overwhelmingly for the AK Party in 2015 parliamentary elections, Turan took to Instagram and his 6.2 million followers to tell Turks that “for a strong Turkey, I am ‘in’”.

He has been joined by popular pop singer Murat Boz, who boasts 5.5 million Facebook fans.

Survey results published in a pro-government newspaper three weeks ago claim that 60 per cent of those polled support the amendments, which require a simple 51 per cent majority to pass into law.

Others pollsters have indicated that the race could be far tighter.

A crackdown on dissent fuelled by a failed military coup last July has silenced opponents of the government and independent media outlets.

Prime minister Binali Yildirm has repeatedly tarred No proponents as siding with terrorism and supporting US-based cleric Fethullah Gulen, who authorities say was behind the botched coup.

The purge that followed has led some critics and media organisations towards self-censorship.

An interview with Turkey’s first Nobel Prize winner, Orhan Pamuk, was pulled by Hurriyet, a centrist newspaper and one of the country’s most popular news sources, after the author indicated that he intended to vote No in the referendum.

Pamuk, the 2006 literature laureate who teaches at New York’s Columbia University, later told a different Turkish outlet: “I said I would be saying no (in the referendum) and explained why. Unfortunately, the news is true. In the end the interview was not published.”

Several Hurriyet reporters and editors have been detained and other critical of the authorities fired as part of the ongoing purge.