‘Weather bomb’ has brought down trees and grounded planes across UK 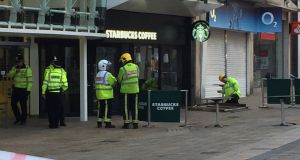 The scene in Wolverhampton city centre after a woman died when she was hit by a piece of roof during Storm Doris. Photograph: Matthew Cooper/PA Wire 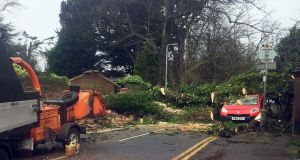 A tree which fell on to a van in St Anne’s Road in Aigburth, Liverpool. Photograph: Eleanor Barlow/PA 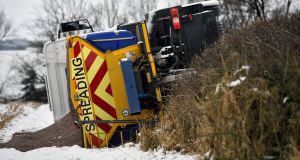 A woman has died in England after being hit by a piece of a roof the “size of a coffee table” during Storm Doris.

Coffee giant Starbucks has since said in a statement that the company is “shocked and saddened by the terrible incident”, which happened outside their store.

Meanwhile, a man in central London was taken to hospital with “head injuries” after Scotland Yard said they were called over reports of “debris falling from the roof of a building”.

The force said they were called to the scene in Victoria Street at around 3pm where the injured pedestrian was found by officers.

With Storm Doris battering large swathes of the country, the woman’s death comes as gusts of almost 95mph have been recorded in parts of the UK.

So far, the weather system has caused travel disruption on the roads and rail network, brought down trees, grounded planes, forced the closure of the Port of Liverpool, toppled lorries and also a bus in Cambridgeshire.

Amber warnings predicting strong winds and heavy rain are in place for North Wales, the Midlands, the east and the northwest and have been extended to include the London area.

The Met Office said gusts of up to 112km/h were likely to be seen in affected areas, with almost 130km/h expected on coasts and hills until around 8pm.

A top wind speed of 151km/h was recorded in Capel Curig, North Wales, on Thursday morning.

The weather has caused schools to close and traffic delays in Scotland.

Rebecca Davis, a 40-year-old teacher from Wolverhampton, said she saw a woman aged “between 20 and 30” receiving CPR after the incident outside Starbucks.

She said the woman appeared to have been hit by something resembling a piece of roof which had fallen off a building nearby, but was unsure where it had come from.

“I think the wind broke it and caused it to fall. I don’t know if it was hit by something else or just the wind did it,” she told the Press Association.

“I don’t think anyone else was hurt. It was a big piece about the size of a coffee table but I think it just hit her,” Ms Davis said.

West Midlands Police said officers were called to a “serious incident” in Dudley Street at around 11.50am and that it is “believed to be related to Storm Doris”.

“Sadly, it quickly became apparent that there was nothing that could be done to save her and she was confirmed dead at the scene,” a spokesman added.