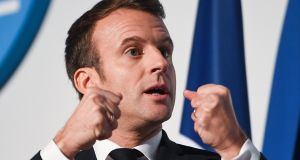 At the EU summit last month President Emmanuel Macron, backed by the Dutch and the Danes, blocked the opening of EU accession talks with North Macedonia and Albania, a process that would anyway take at least 10 years. No more accession, he insisted, until the whole cumbersome process of joining was reformed.

Most member states were furious. The European Commission had accepted that both countries had demonstrated a willingness to take on political and economic reform and had met the criteria for opening talks.

Accession talks for Serbia and Montenegro are under way. But slow. And it’s difficult to see the French proposals speeding the process up

And there was a strong sense that North Macedonia needed to be rewarded for its willingness to settle the long-standing dispute with Greece over its name with a politically perilous accommodation that was widely despised at home.

The EU also needed concretely to acknowledge the “European vocation” of both states if it was to show others in the region that there is an alternative to succumbing to the determined wooing of Russia and China.

In a “non-paper” produced for ministers this week, the French acknowledged as much in glowing – some would say deeply disingenuous – terms: “We reaffirm our unequivocal support to the European perspective of the Western Balkan countries.

Albania, Bosnia and Herzegovina, Kosovo, Montenegro, North Macedonia and Serbia belong to Europe, by virtue of their history, culture and geography. Closer ties with the European Union are the only way for these countries to build or consolidate states based on the rule of law and open and pluralistic societies, pursue their economic and social development, give their youth a future perspective and promote reconciliation between peoples.”

Accession would be possible, however, “once the European Union had been reformed and made more effective . . .”, Paris declared. Note, the demand is now for the whole European Union to be reformed.

How about “once the Shannon has been drained”? Or when hell freezes over.

In truth, some argue, the French approach is nothing but pandering to the far-right’s anti-immigrant lobby particularly in regard to the much stigmatised Albanians.

It’s a slow enough process even when accession talks start. Some 30 years ago, on the occasion of Turkey’s formal membership application, then prime minister Turgut Özal likened the process to “a long and narrow road”, alluding to a famous verse by the folk-poet Asik Veysel. Turkey is still waiting, its 15 years of talks now suspended over its lurch back to authoritarianism.

Accession talks for Serbia and Montenegro are under way. But slow. And it’s difficult to see the French proposals speeding the process up. That’s clearly not their intention.

Macron’s proposals involved streamlining the negotiating chapters from 35 to seven – all the old areas from justice to competition policy still included, but subsumed under the new headings. All very well, but instead of being negotiated simultaneously, he is proposing sequential talks with each new stage conditional on success and completion of the previous round. A process that could go on forever.

He also puts a strong emphasis on the “reversibility” of the process as an incentive to applicants not to backslide on the way – but, as the Turks would point out, the process is already very reversible.

Ireland has been supportive of the aspirations of the western Balkans, Minister of State for European Affairs Helen McEntee travelling to the region to express its support. On Tuesday, she was adamant in her backing for the promised opening of accession talks, and although willing to embrace discussion of reform of the process she insists it must not be allowed to hold up the North Macedonian and Albanian start dates.

The commission and most member states want to give them the go-ahead by the March EU summit. They are willing to accommodate the French to the extent of asking the commission to come up with reform proposals, which the latter has promised to do by January.

A group of six pro-accession states – Austria, the Czech Republic, Italy, Poland, Slovakia and Slovenia – drafted a letter to this effect this week for proposals “to enhance the effectiveness of the accession process”, which Ireland was understood to be considering signing.

Enhancing the effectiveness of the accession process is perhaps not what Paris has in mind in its blueprint. But even talks on reform may be enough to get the French veto lifted.