Mikheil Saakashvili threatened with extradition to his homeland 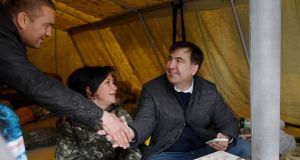 A man shakes hands with former Georgian president Mikheil Saakashvili as he sits in a tent during a protest against Ukrainian president Petro Poroshenko in Kiev on Sunday. Photograph: Sergei Supinsky/AFP/Getty Images

Ukrainian prosecutor general Yuri Lutsenko has accused former Georgian leader Mikheil Saakashvili of plotting a coup in Ukraine and said Kiev has rejected his asylum request, opening the door to possible extradition to his homeland.

Mr Saakashvili has been a prominent figure in recent protests against Ukrainian president Petro Poroshenko and his government outside parliament in Kiev, but Mr Lutsenko claimed these were serving as cover for an attempt to seize power.

The ex-Georgian president denied that a ruling had been made on his asylum request, which he filed after forcing his way back into Ukraine last month, and said several Georgian associates in the country had been kidnapped and others deported in recent days.

“I want to say that Saakashvili, unfortunately, has crossed a red line. He is lying, he is provoking things with the aim of seizing power personally,” Mr Lutsenko said on Tuesday.

He alleged that several people connected to Mr Saakashvili had been detained for trying to acquire weapons, and said the leader of Georgia’s 2003 Rose Revolution had arranged for 20 close allies from his homeland to receive Ukrainian residency permits when he served as governor of the Odessa region in 2015-2016.

“Now they are preparing a coup – it will not happen . . . Saakashvili has challenged the state and law enforcers will respond,” Mr Lutsenko declared.

Mr Saakashvili is one of several politicians to lead protests demanding major anti-corruption reforms, which drew several thousand people last week. He has called for demonstrations to continue, and about 200 protesters are still camped outside parliament.

“The right to protest does not mean preparation for a violent coup started by a small group of people,” Mr Lutsenko said. “About 150-200 people are demanding only what they want, with the help of financing from abroad. I will prove it all when the time is right.”

Mr Saakashvili fell out with Mr Poroshenko after he resigned as Odessa governor and accused Ukraine’s leader and his allies of blocking real reforms.

Mr Poroshenko annulled Mr Saakashvili’s Ukrainian citizenship in July for alleged irregularities on his application form, but he shoved his way back across the border from Poland with supporters last month and applied for asylum.

At around the same time, Georgian prosecutors sent Kiev another extradition request for Mr Saakashvili, whom they accuse of abuse of power during nearly a decade as president.

“Now the state migration service has refused refugee status for Saakashvili. Now he is stateless, without any circumstances that would make his deportation impossible,” Mr Lutsenko said.

Mr Saakashvili accuses Mr Poroshenko and allies of trying to silence him and says he faces persecution by enemies in Georgia; Ukraine rejected previous such requests from Tbilisi as politically motivated.

“Every word of Lutsenko’s is a vile lie,” a furious Mr Saakashvili said in Kiev on Tuesday, announcing that he would now stay in the protest camp outside parliament, calling on Ukrainians to “protect him” from Mr Poroshenko.

1 More than 30 people queue overnight to secure property in Carlow
2 Hello Eir, is anybody there? Four unhappy customers complain
3 Large sections of Garda to be disarmed following review
4 Covid-19: Possible extra restrictions for four counties to be decided by weekend
5 Coronavirus: Further 430 cases reported in State is most in a day since April
Real news has value SUBSCRIBE