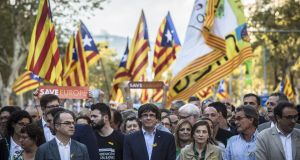 Carles Puigdemont, Catalonia’s president, participates in a demonstration on Saturday against the Spanish government and the imprisonment of separatist leaders. Photograph: Bloomberg

The political division that Spain’s territorial crisis has created was all too visible on the front pages of the newspapers on Sunday.

The main headline in the pro-independence daily Ara read: “Catalonia prepares to defend its institutions from Rajoy’s coup.”

Such has been the response to the Spanish government’s triggering of the procedure to implement direct rule in Catalonia.

For prime minister Mariano Rajoy, and the many Spaniards who support his rigid opposition to the Catalan independence movement, it was the only logical step after months of tensions.

On Saturday, as he announced how he would use article 155 of the constitution to take control of the region, Rajoy, usually so reluctant to express himself in public, was at pains to defend the decision in detail.

But for the Catalan government and those Catalans who voted in the outlawed referendum of October 1st, this was a stunningly belligerent decision, made no less significant by the fact it had been widely anticipated for weeks, if not months.

There had been talk beforehand that Madrid would seek to introduce article 155 in a “soft” way, and Rajoy insisted he was “not suspending Catalonia’s self-government”.

Yet it is hard to view this measure as anything other than a “hard” re-centralisation, given that it means the removal from office of the entire Catalan cabinet, with their portfolios to be taken on by ministers in Madrid; the reining in of the powers of the Catalan parliament; and the calling of regional elections, their date to be decided by Rajoy, not Puigdemont.

The response has been visible immediately on the streets of Barcelona, with a massive demonstration on Saturday and many more likely to come. But once again, Puigdemont faces a dilemma.

He could call elections himself in the next few days, which would be seen as a conciliatory move that could defuse the tension somewhat, and even feasibly stave off the use of article 155.

But elections, whoever calls them, are likely to be only a short-term fix.

“Some people might think that the way out of all this is elections,” says Oriol Bartomeus, a political scientist at Barcelona’s Autònoma University. “But the problem is, I don’t think they’d give a different result to that of 2015. So if that’s the case, it’s not a solution.”

Another option for Puigdemont would be to declare independence in a clear, unambiguous fashion, thus sending a firm message back to Madrid and appeasing many of his allies who are clamouring for such a move.

But given the mood of the Rajoy government and the lack of European support for the independence project, that could simply be another nail in the coffin of Catalonia’s self-government.