‘Outsiders’ Varadkar and Macron to discuss Brexit in Paris talks 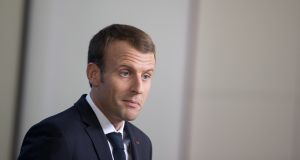 France’s president Emmanuel Macron has promised to put digital taxation “at the top of the agenda” of the OECD ministerial conference next year. Photograph: Jasper Juinen/Bloomberg

Taoiseach Leo Varadkar will meet President Emmanuel Macron at the Élysée Palace on Tuesday morning for a broad survey of bilateral, European and international issues. It will mark the fifth time the two men have talked, but their first long, wide-ranging conversation.

The Taoiseach’s office and the Élysée have presented the meeting as that of a new generation of young, dynamic, forward-looking European leaders. At age 38, the Taoiseach is a year younger than Mr Macron. “Both are outsiders,” says a source at the Élysée. “President Macron created his own movement and stood for the presidency without ever having held elected office. Taoiseach Varadkar embodies renewal in his own party.”

For all their relief over Mr Macron’s defeat of the extreme right-wing Front National leader Marine Le Pen, it remains to be seen whether other heads of state and government, including Mr Varadkar, will be willing to support him in the “refoundation of Europe, ” as outlined in a landmark address at the Sorbonne on September 26th.

Mr Varadkar and Mr Macron will discuss Brexit negotiations, including an eventual financial settlement with Britain, citizens’ rights and the Border, the three subjects addressed so far by the European Union negotiator Michel Barnier. The Élysée stresses that “France supports Ireland fully” on the Border, as does the EU as a whole.

Tuesday’s visit may provide an indication of the Taoiseach’s willingness to follow Macron’s initiatives to transfer sovereignty from national to EU level. The French leader’s proposals for social and fiscal “convergence” strike many of his partners as federalism. Will Ireland, for example, follow France’s example in holding “democratic conventions” on the future of Europe next year?

In France, Mr Macron’s reform of the labour code and tax relief for the wealthy have been criticised as too liberal. But he has a far more “social,” even protectionist image in Europe than Mr Varadkar.

At the EU summit in Brussels last week, the two leaders defended opposing points of view on digital taxation. Mr Macron called the discussions “extremely honest and direct”. The Politico website reported they had “a fierce debate” and “an animated clash” over Mr Macron’s taxation proposals regarding Google, Apple, Facebook and Amazon, who are known collectively as “Gafa” in France.

In the exchange with Mr Macron, Mr Varadkar represented an informal, emerging alliance of small, northern European countries who are economic liberals. It includes the Scandinavian and Baltic states, the Netherlands and Ireland.

Mr Varadkar achieved his goal of referring the question of digital taxation to the Organisation for Economic Co-operation and Development. Ireland maintains the OECD is the proper forum, because the response must be global, not just European. The French have seen that as a attempt to buy time by countries which benefit from offering low tax to digital giants.

Ireland argues that EU taxes on digital companies would mean double taxation, “which would deter the bigger players in the global sphere from engaging with European countries”. Nonsense, says the Élysée: “The European market is 500 million consumers. If we act on a European level on tax rules, there is no company, no matter how big, that can ignore the European market.”

Mr Macron is not giving up. At France’s request, the European Commission will report on proposals for digital taxation early next year. “If the international [OECD] process is too slow, we can’t wait forever,” said a source at the Élysée.

Furthermore, when France assumes the presidency of the OECD ministerial conference next year, Mr Macron has promised to put digital taxation “at the top of the agenda”.

Ireland’s low, 12.5 per cent, corporate tax rate has been in French sights for two decades. The French call it “fiscal dumping”. More recently, an uglier word, “freeloading”, has crept into the vocabulary. In his Sorbonne speech, Mr Macron said that ultimately European funds might have be withheld from countries who practice what he sees as unfair competition.

The harmonisation of corporate tax rates remains a long-term French goal. “You cannot have within Europe, and all the more so in the euro zone, huge differences in major economic parameters such as minimum wage and corporate tax,” a French official said. Mr Macron is showing his willingness to compromise, by promising to reduce French corporate tax from 33 per cent to 25 per cent by 2022.

If the topic comes up, Mr Varadkar is expected to stand firm. “The issue [of corporate tax] is inextricably linked with digital taxation,” says an Irish official “We are sticking to this, in case anyone is under any illusion we are not.”

Irish and French interests coincide better on the Mercosur trade deal with Latin America, where both are concerned to protect their agricultural sectors.

Mr Macron will endorse Ireland’s application for observer status in “La Francophonie”, the grouping of French-speaking countries which Paris likens to the British commonwealth.